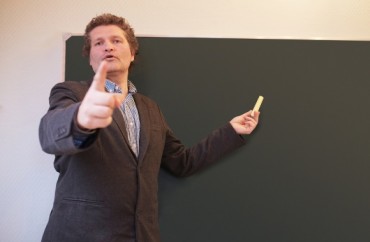 But black teacher may be in trouble for encouraging boycott

A white Jewish student groused to two white Jewish guidance counselors that she had been waitlisted at a top university, while peers with worse academic achievement got in without a problem.

The reporter had tweeted Saturday that the “white senior” was “heard loudly complaining that her black classmates received college offers only because they were black,” without further context.

But the New York Post interviewed the student and noted both she and the guidance counselors were Jewish. They were “reviewing Scattergrams, charts on admission data, showing that some students with less academic qualifications than she were accepted,” and the counselors mentioned “scholarship programs for minorities.”

This is what provoked her to complain about “the unfairness of students who were accepted to college without meeting the rigorous criteria that I and others worked so hard to achieve,” she said.

That’s when the black student “barged into the meeting” and started calling her racist, provoking “cyberbullying and threats” and even one teacher telling her she doesn’t realize her Jewish “privilege,” the Jewish student said.

Shapiro tweeted that a boycott organizer told her that black teachers “encouraged the students to strike,” and the Post identified one of them:

“What we’re asking of all students: Do not come to school that day to show solidarity for the support of not just students of color but all students at Beacon in providing a safe space,” said a teacher who identified himself as “Mr. Green” at Friday’s boisterous cafeteria gathering, which was videotaped.

“Until the demands are met, students are not to return to school,” the teacher — identified as science instructor Demetrius Green — exhorted the crowd of hundreds of teens.

Some Beacon students called for a sit-in instead, suggesting kids wear black and tape their faces.

But the teacher asked, “What is that going to do? Students before you, before I, have done the same thing, and nothing has happened.”

Shapiro posted a list of demands circulated by protesters. The administration must apologize to students – in multiple assemblies and a press statement – for “allowing racism to fester” for years within the student body and the administration itself.

They want an investigation into the guidance counselors, investigations within 48 hours of reported “acts of hostility,” software tracking of reported incidents on each student’s permanent record, and “mandatory workshops and training” for staff and students on affirmative action, microaggressions and implicit biases.

On top of that, teachers must attend “culturally responsive education” training and the school must diversify counseling staff, getting rid of the “elitist hiring process.” Students should be given time to complete assignments and other work that was due while they were protesting.

More on upcoming Beacon protest: some kids will boycott, most will participate in a teach-in at the school led by students. Here’s the list of demands for the admin: pic.twitter.com/U0YbJyczVs

Principal Lacey emailed students on Saturday to say she was “moved by the passion” of protesters on Friday. The “patterns of behavior” they mentioned are “unacceptable.” She alluded to the planned Monday boycott, suggesting no one would be penalized for missing class.

The protest ended after Lacey announced she was agreeing to some student demands, according to Shapiro.

Green, the teacher who called for a boycott, could be in trouble, however. The city Department of Education, education commissioner for investigations and teachers union received “written and verbal complaints about Green’s call for a boycott,” and the department told the Post it will investigate “reports of bullying and staff misconduct.”