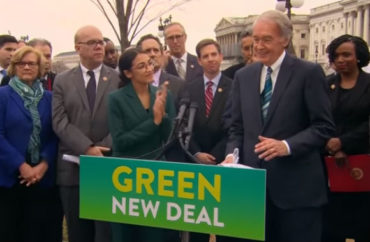 If you’ve heard that Green New Deal supporters want to increase government control over all facets of life more than they want to protect the environment, well, here’s more evidence of that.

An assistant professor of urban planning at UCLA argues in the far-left magazine The Nation that California is doomed as long as people keep owning homes.

“If we want to keep cities safe in the face of climate change, we need to seriously question the ideal of private homeownership,” says Kian Goh, who researches urban ecological design, “spatial politics” and social mobilization “in the context of climate change and global urbanization.”

Goh considers it “news” rather than fevered speculation that “we may only have a dozen years to contain global warming,” as shown by destructive California wildfires in recent months and “precautionary power shutoffs” by utility companies.

Proposed solutions, including a public takeover of Pacific Gas & Electric, are missing one of the most important factors in climate change-driven destruction, Goh warns: “economic development, aspirations of home ownership, and belief in the importance of private property.”

To prevent catastrophe, Americans must reconsider their ideas about “success, comfort, home, and family,” particularly the single-family homes that followed in the wake of the Homestead Act of 1862 and federally backed mortgage insurance, the professor argues.

These policies benefited white middle-class families and “became synonymous with freedom and self-sufficiency” even though they represented “[e]xpansionist, individualist, and exclusionary patterns of housing.”

You can’t support poorer people if you continue to insist that home ownership is a core American value, according to Goh, who fumes that even the state’s progressive governor Gavin Newsom is only talking about “hardening” structures against fire: “Any suggestion that we might discourage rebuilding on privately owned land is promptly tamped down.”

Two things are clear to the professor: “Cheap energy is untenable in the face of climate emergency. And individual homeownership should be seriously questioned.”