A school district in Massachusetts is the recipient of a $10,000 grant from the Southern Poverty Law Center which will assist students in lobbying to change the state flag, and campaign on behalf of the Green New Deal.

According to a press release from the Amherst Regional Public Schools superintendent, the SPLC’s “Teaching Tolerance” grant builds upon an existing “Civic Literacy and Organizing unit” in which students offered solutions to a “societal problem,” and then worked with “Organizers in Residence” to effect change.

Culminating at the Youth Activism Festival this past May, students from the Fort River School not only worked to change the state flag and support the brainchild of New York US Representative Alexandria Ocasio-Cortez, but to “prevent deforestation” in the state.

The Massachusetts flag, students say, is “violent and denigrating” to Native Americans … as well as “racist”:

Join the Fort River 6th grade students to pass the Bill (HD.2968 and SD.1495) to change the current Massachusetts State Flag, with a flag that represents Native Americans in a less violent and more welcoming way. Watch and share on social media then make your own video! pic.twitter.com/HcL8n6A2DK

According to PJ Media, a trio of students wrote a letter to The Boston Globe stating “The current flag [below] features an arm holding a sword over the head of a Native American, along with other disturbing details […] Massachusetts is a peaceful state, and the Commonwealth’s current flag is not allowing us to put our best foot forward. The 400th anniversary of the landing of the Mayflower is coming in 2020, and we want this flag change to reflect our history by honoring Native Americans.” 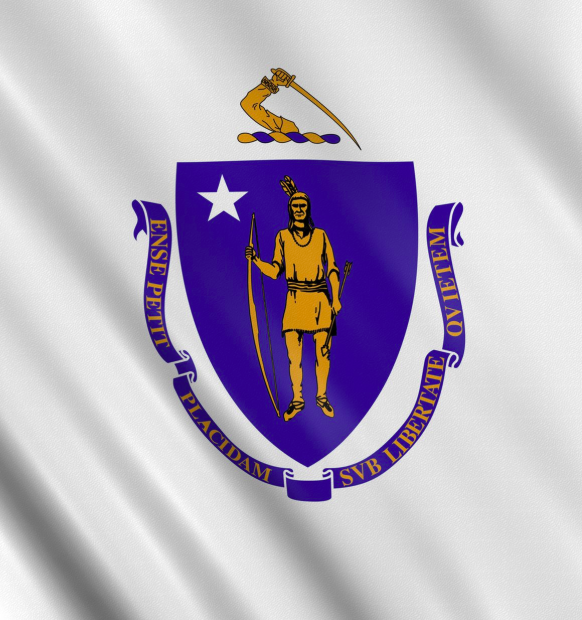 The state flag includes the state seal, which features a blue shield with an Algonquian Native American with bow and arrow, with the arrow pointed downward, signifying peace. The motto, “Ense Petit Placidam sub Libertate Quietem,” comes from the Book of Mottoes by Algernon Sidney and translates to “With a sword, she seeks quiet peace under liberty.” Above the shield stands a military crest: a bent arm with a broadsword aloft.

The Green New Deal, according to AOC’s chief of staff, was never actually about climate change in the first place: “[W]e really think of it as a how-do-you-change-the-entire-economy thing,” Saikat Chakrabarti recently told the Washington Post.

Not to mention, the SPLC’s own credibility is sorely lacking.

Nevertheless, the program at Fort River will be expanding to other district schools. Superintendent Michael Morris said, “We are so appreciative of the Southern Poverty Law Center’s support for this vital civic engagement experience for our students.”