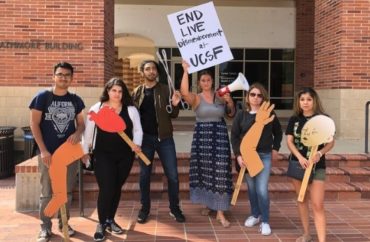 And for having them arrested while protesting on public property

Pro-life activists are “coming closer” to filing a lawsuit against the University of California-San Francisco for stonewalling their public records requests on the medical school’s alleged fetal harvesting and experimentation, one of them told The College Fix.

UCSF groundlessly claimed Pro-Life San Francisco’s requests were “overly broad,” Robert Byrd, executive coordinator of the group, wrote in an email on behalf of its executive director, Terrisa Bukovinac. In fact, they made “very specific requests for communications regarding the transfer of fetal tissue and a particular researcher.”

“We know the fact that we’re in the middle of a global pandemic will work in UCSF’s favor with most judges,” the email read, but it’s clear university officials are “absolutely stalling” on answering valid Freedom of Information Act filings.

Pro-Life San Francisco (featured image above) publicly outed the university last summer as an alleged FOIA scofflaw, also claiming in a video that it hid its protocols for ensuring fetal death.

It plans to seek a legal injunction forcing UCSF to cough up hidden records, as well as sue for the wrongful arrest of pro-life activists, the email said.

UCSF had them arrested on inexplicable “trespassing” charges in November for protesting on a public sidewalk outside of UCSF’s Zuckerberg General Hospital. That’s where they claim fetal harvesting and experimentation is being conducted with the full knowledge and sponsorship of the university.

A video of the arrests shows the pro-life activists had not even begun to chant when they were arrested.

The university claimed that no information on specific fetal harvesting practices was “available” until the researcher using the fetal material had “published a public study,” Byrd told The Fix on behalf of Bukovinac.

Yet Pro-Life San Francisco’s legal counsel had sent UCSF “an extensive list of publicly published studies directly related to almost all of [their] requests,” to no avail. The list, which Byrd shared with The Fix, named the researchers, studies and the associated funding contracts (below).

The publicly available studies published by UCSF researchers include experiments in which the intestines and reproductive tracts of otherwise healthy aborted babies were transplanted into rodents.

Among the “select few” documents that UCSF did release, the email said that Pro-Life San Francisco was able to determine that many regional Planned Parenthood clinics are being staffed by students, not “actual practitioners.”

Regarding the “citizen’s arrest” of Bukovinac outside the hospital, the email said administrators are “willing to face the threat of a lawsuit” to stop First Amendment activity:

I think that speaks volumes as to the lengths they will go in order to silence our efforts. The news about their barbaric practices is spreading and they are feeling the pressure from the community more than ever.

City attorney Dennis Herrera is “expectedly hostile” to the activists, given his support for abortion rights, the email added. “At this time, if we physically go to the public property where these crimes take place on taxpayer dollars,” the activists will face arrest again.

Bukovinac’s lawyer told The Federalist in December that his client was arrested “basically just for showing up.”

Hospital administrators arbitrarily declared she was “within an area” that was too close to the facility’s entrance, Thomas More Society senior counsel Martin Cannon said. His client, who is also president of Democrats for Life, had been arrested “anticipatorily.”

Cannon’s public interest law firm did not respond to several queries from The Fix seeking an update on the status of the trespassing charge against Bukovinac.

The Life Legal Defense Foundation, which is representing the other activists, told The Federalist the arrests were “unlawful” given that the protestors were engaging in “constitutionally protected speech on a public sidewalk.”

Executive Director Alexandra Snyder suggested the arrests were merely an “attempt to suppress the dissemination of information in order to protect UCSF.”

CORRECTION: Statements originally attributed to Byrd should have been attributed to Bukovinac, on whose behalf he was speaking. The article has been fixed.