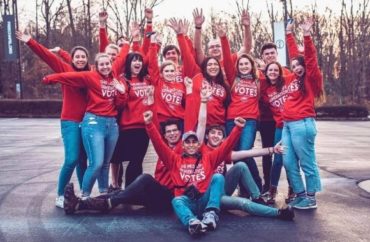 While Students for Life Action no longer will have a pro-life ally in the White House, it plans to continue to work to hold politicians accountable for how they vote on issues related to abortion.

The political advocacy arm of Students for Life of America recently announced the “Pro-Life Generation Scorecard” to grade Congress.

Much in the way that other political action groups like the National Rifle Association or Heritage Action for America score politicians on how they vote on legislative priorities, SFL Action will grade on how they vote on certain specific abortion issues.

“SFLAction’s newly launched Pro-Life Generation Scorecard will be a tool for evaluating those who weigh in on abortion and on policies that will help mothers and their children, born and preborn, in a Post-Roe America,” Kristan Hawkins, the group’s president, said in a January news release.

“We will be communicating to elected officials on our positions and scored votes and engaging in outreach through texts/phone calls/in-person meetings when possible, utilizing all the tools available,” Kristi Hamrick, a spokesperson for the group, said in an email to The College Fix. “This will be on-going, daily work for our c4 team.”

Upcoming issues include the confirmation of Xavier Becerra, President Biden’s nominee for Secretary of Health and Human Services. “Xavier Becerra has a track record of abusing the power of his office to favor abortion vendor,” Hawkins said in a December statement. She said Becerra “has been a loyal soldier, advancing the interests of the abortion lobby whenever possible.”

“Our SFLAction Scorecard will have a weighted score,” Hawkins said in the January statement. She said “direct abortion-related votes will be most significant, but other issues will be scored for their service and support to mothers and their children, born and preborn.”

The advocacy group has been active at both the federal and state level.

“Students for Life Action was launched to capitalize on the desires the Pro-Life Generation in all 50 states who want to add direct political engagement on the issue of abortion to their outreach to women who are directly targeted by abortion vendors,” Hawkins said in January.

Say NO to radical pro-abortion policies.
Say NO to @AGBecerra's nomination to the HHS.

The group’s political involvement includes door-knocking in support of pro-life candidates. It recently testified in Montana on a handful of abortion-related bills, according to the group’s website.

It wants to see its “Post-Roe” agenda implemented, referring to its belief that the Supreme Court decision that legalized abortion across the country will eventurn be reversed.

“In a post-Roe America, communities must rise to the challenge of protecting mother and child, and expanding the infrastructure needed to help them both prosper,” Hawkins wrote in a February 2020 opinion piece in the Washington Examiner.

SFL Action wants to see an expansion of the child tax credit, enforcement of Title IX protections for pregnant students and restrictions on abortion according to its “Post-Roe Blueprint.”

MORE: Students for Life member assaulted outside of Supreme Court

Editor’s note: College Fix assistant editor Matt Lamb is the former executive director of Students for Life Action and worked on the Post-Roe Blueprint while there.