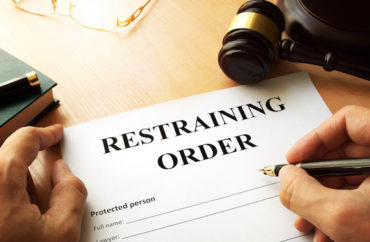 A recent graduate at a Catholic college in Rhode Island has been served with a restraining order as well as a ban from campus, with a school administrator accusing him of threatening behavior. The student, meanwhile, denies that he posed any threat to the administrator, instead accusing her of “revenge behavior.”

Michael Smalanskas, a recent graduate of Providence College, where he was a senior resident adviser, was served with the orders on May 21 following a series of alleged interactions with the school’s Vice President for Student Affairs, Kristine Goodwin. The restraining order was temporary and set to expire on May 31; the no-trespass order will be in effect for a year.

Both Smalanskas and Goodwin have been at the center of mutual controversy at Providence College in recent months. In March of this year, Smalanskas was the target of death and rape threats on campus after he constructed a pro-traditional marriage display in a dormitory hallway. In response to the poster, Goodwin at the time sent out a campus-wide email that, in part, encouraged students to attend a “March Against Homophobia and Transphobia.”

“I was threatened with rape, while she helped organize a protest against me for my traditional views on marriage,” Smalanskas told The College Fix.

The restraining order and no-trespass injunction come after an alleged series of altercations between Smalanskas and Goodwin. According to the civil restraining order filed by Goodwin, Smalanskas had “demonstrated an escalation of animosity toward” her over a period of two months, culminating in two incidents at a commencement Mass on the school’s campus.

According to Goodwin, at one point Smalanskas “stopped approximately 10 feet away from me and glared at me for 5-8 seconds. He was visibly angry and stared at me causing me to feel surprised, uncomfortable, and afraid as to what he might do next.”

Later, Goodwin says Smalanskas waited for her outside of Mass, and upon seeing her he began “yelling my name louder and louder. He yelled something to the effect ‘You should be ashamed of yourself Kristine Goodwin, Kristine Goodwin – they threatened to rape and murder me and you did nothing Kristine Goodwin.'”

“He got louder and louder either by walking closer and following me or yelling louder. I was more fearful for my physical safety than I have ever been,” the complaint reads. “While his words were not expressly threatening his actions toward me have escalated quickly.”

“On the way back from Communion, during Mass, she was sitting in my line of vision,” Smalanskas told The Fix. “We did make eye contact but I did not stop in front of her as she contends. It’s unclear to me how passing eye contact can be threatening.”

Smalanskas did not deny yelling at Goodwin after the Mass, though he pointed out that by Goodwin’s own account his words were not threatening.

As part of the complaint, Goodwin also expressed fear about Smalanskas’s father, “who has access to weapons and information about my whereabouts.” Smalanskas called this “completely unfounded.”

“My father has been a police offer for 32 years with a spotless record…This is ideological warfare against men, guns, police, and religion,” Smalanskas said.

He said that his father had previously met with Goodwin over the incident earlier in the semester. In her complaint Goodwin says his father yelled at her during this meeting.

Reached for comment via email, campus spokeswoman Madeline Parmenter told The Fix that “a civil restraining order was issued by the court after Mr. Smalanskas’ unacceptable conduct toward a member of our community on campus this past weekend. Because of the serious nature of his actions, the College has restricted his access to campus.”

When emailed for comment, Goodwin referred The Fix to another campus spokesman, Steven Maurano. Asked for comment on Smalanskas’s denials of Goodwin’s claims, Maurano repeated the statement from Parmenter. He also provided The College Fix with several Internet comments from an Ocean State Register article on the controversy. Those comments accused Smalanskas of “red-faced screaming” and “obnoxious” and “atrocious” behavior.

Pressed further, Maurano said the copied-and-pasted Internet comments were currently the only response the university was willing to make to Smalanskas’s denials.

Smalanskas told The Fix he is currently struggling to figure out how to attend his on-campus job at the school’s Barnes & Noble Bookstore.

“My job is waiting for me if I can have access to the campus. Otherwise my boss is trying to relocate me if necessary,” he said.

Smalanskas said that there will soon be a hearing “to determine if the restraining order is extended or gets dismissed.”

“But the no trespass order is from the college, and I am unaware of any way to contest it,” he added.