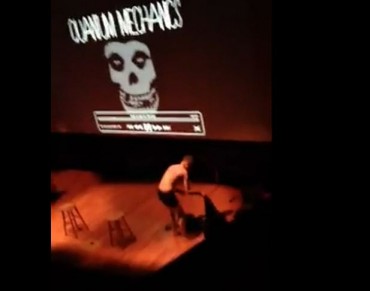 A science professor at Columbia University on Monday began a quantum mechanics lecture by stripping into his boxers and eating a banana while rap music played in the background.

Then it got weird.

The professor, Emlyn Hughes, proceeded to redress himself in black, complete with sunglasses, and hug himself on stage at the front of the classroom, a large theater.

As Hughes sat in the fetal position, two “actors” dressed in ninja costumes walked onstage and placed white stuffed animals – lambs – on stools before the audience, according to a student-recorded video of the incident posted on Vimeo.com by “Bwog,” a campus news website run by Columbia students.

The ninjas blindfolded the lambs, then a ninja impaled one of the stuffed animals with a long sword and banged it against the stool – right as an image of a plane hitting one of the Twin Towers on 9/11 started rolling on a large screen behind the performance.

Students in the video could initially be heard laughing and giggling and questioning the performance when it started, even squealing in shock with Hughes had first undressed.

“I am so confused,” one female student said on the video. “What is happening.”

After the lamb’s grisly “death” and the images of 9/11, the footage turned into a montage that included clips of Osama bin Laden, Saddam Hussein and Hitler – as well as numerous shots of war images – tanks rolling, bombs exploding, people hanging upside-down, troops marching, and the like.

As the footage continued, a rap song called “Drop It Like It’s Hot” played in the background.

Students’ reaction turned from laughter and amused surprised to concern, according to comments heard on the video.

“What the f**k is happening,” one female student asked. “Is this real life? … How does this relate to anything?”

Eventually, the film ended and the professor began his lecture. But when he first grabbed his microphone, at least one student mistook it for a gun, saying with concern: “He has a gun, he has a gun.”

The bizarre episode lasted less than ten minutes. The Vimeo clip included the very first part of Hughes’ lecture, in which he told students that “in order to learn quantum mechanics, you have to strip to your raw, erase all the garbage from your brain and start over again. … Everything you do in your everyday life is totally opposite of what you are going to learn in quantum mechanics.”

The Columbia Daily Spectator, the student campus newspaper that reported the news Monday of the professor’s performance, quoted several students who said they were troubled and confused by what unfolded.

Student Maura Barry-Garland told The Spectator that “the incident was all the more disconcerting because Hughes did not provide an explanation for using those images.

“It was very disturbing, and I don’t think anyone in the audience got what he was doing. He didn’t explain it or provide a context, and that’s why it was offensive to me and to other people,” she told the student newspaper.

The Spectator also reported Hughes’ performance Monday was not his first “stunt,” noting in a 2011 lecture “he showed students nude photos of Woodstock attendees.”

According to his bio page on the university’s website, Hughes stated that “via my background in nuclear physics activities, I have a deep interest in issues relevant to nuclear proliferation.”

Click here to read the Columbia Daily Spectator article on the incident.