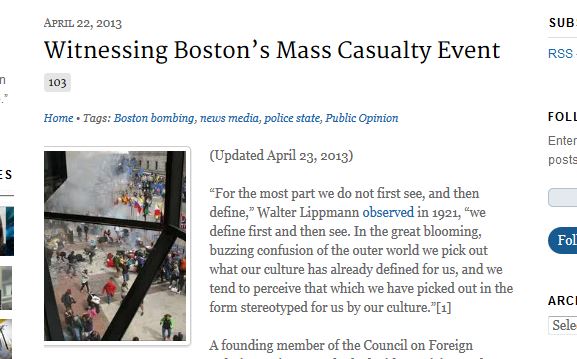 A Florida Atlantic University communications professor known for conspiracy theories who argued the Sandy Hook Elementary School massacre “did not happen as reported — or may not have happened at all” called the Boston Marathon bombings a “mass casualty drill.”

On his personal blog, Professor James Tracy questioned government and police accounts of the Boston Marathon bombings, saying the amount of damage shown on the videos and what authorities say caused that damage don’t coincide.

He stated in his post, dated April 23 and titled “Witnessing Boston’s Mass Casualty Event,” that “photographic evidence of the event suggests the possibility of play actors getting into position after the detonation of what may in fact have been a smoke bomb or similarly benign explosive.”

“What exactly took place on April 15 at the Boston Marathon is unclear, yet what is now evident is a stark divergence between the narrative description of excessive carnage meted out as a result of the explosive devices and at least a portion of the video and photographic documentation of the bombing itself,” Tracy stated on his blog post.

“The event closely resembles a mass-casualty drill, which for training purposes are designed to be as lifelike as possible,” he continued. “Since it is mediated, however, and primarily experienced from afar through the careful assemblage of words, images, and the official pronouncements and commentary of celebrity journalists, it has the semblance of being for all practical purposes ‘real.’ ”

“Reports arising in the Boston bombing’s aftermath suggest how local authorities in possible coordination with the Department of Homeland Security were in the process of carrying out such drills, complete with the announcement of bombs being detonated and bomb-sniffing dogs present at the start and finish lines.”

Tracy’s current line of thought follows a similar one he promulgated after the Sandy Hook Elementary School massacre in mid-December in Newtown, Conn.

At that time, he claimed in radio interviews and on his blog that “trained ‘crisis actors’ may have been employed by the Obama administration in an effort to shape public opinion in favor of the event’s true purpose: gun control.”

Tracy’s blog is not affiliated with Florida Atlantic University. His comments about the Newtown massacre prompted outrage across the nation.