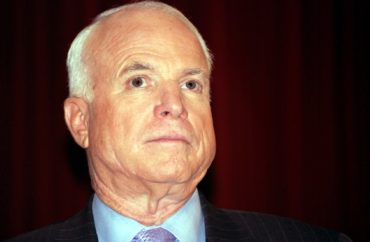 A San Diego State University political science professor has expressed annoyance at all the good wishes for Sen. John McCain after his recent brain cancer diagnosis, prompting controversy among students.

“I find myself annoyed at the groundswell of good wishes for John McCain after his diagnosis of glioblastoma and have been thinking through why,” Professor Jonathan Graubart recently posted on Facebook about the Arizona Republican.

Graubart went on to question why the “elite” often seems to be considered more important than the unknowns.

“McCain is a war criminal and, more to the point someone who as a politician has championed horrifying actions and been lousy on state commitment to public health. So dying or not, he’s a risible public figure (I have no idea what he is like on the personal level and don’t care),” the professor wrote on Facebook on July 21. 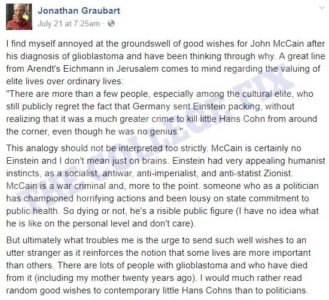 “But ultimately what troubles me is the urge to send such well wishes to an utter stranger as it reinforces the notion that some lives are more important than others. There are lots of people with glioblastoma and who have died from it (including my mother twenty years ago),” Graubart added.

“I would never wish cancer upon my worst enemy and then to be annoyed by people just wishing you the best for having cancer, I just thought it was totally inappropriate,” student Ben Dilbeck said.

The post was read around the world. Former SDSU student Colby Tunick read it while in Prague.

“I think I was a little disturbed to be quite honest,” Tunick said. “You may disagree with someone politically, morally, philosophically, but you don’t wish someone harm.”

And the College Republicans of San Diego State University put out a statement expressing “disappointment” in Graubart’s statement.

Referencing a San Diego State associate dean who last month called the Republican Party an “extremist terrorist organization,” the College Republicans of SDSU said that incident coupled with this latest one represents a “discriminatory atmosphere towards conservatives on campus.”

Graubart did not respond Sunday to a request for comment from The College Fix.

In a statement to ABC News San Diego, a San Diego State University spokesperson said the university “does not have a social media policy for faculty and staff.”

“As a public institution, we do not and cannot regulate the private speech of students, faculty or staff. However, that should not imply the university’s endorsement of any particular viewpoint.”