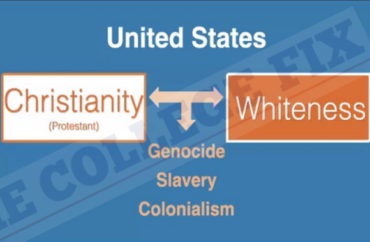 Rutgers University held the lecture on September 9 to explore the topic of “white Christian privilege.”

The law school’s Center for Security, Race and Rights hosted Professor Khyati Joshi for the presentation. Joshi published a book in July with the same title as her presentation, called “White Christian Privilege: The Illusion of Religious Equality in America.”

The professor of education also said she consults regularly with employers and schools on these topics.

Joshi’s presentation discussed how whiteness and Christianity are responsible for “genocide,” “slavery” and “colonialism.” She said she wants people to understand “the role Christianity has had in the construction of whiteness.”

She said that concepts like manifest destiny, the idea that colonizers were led by God to take over land, prove her points about white supremacy and Christianity.

“We have to also take into account the Biblical justification for slavery,” Joshi added.

. @SikhProf writes on @ProfKJoshi's new book, saying that it argues "that our perception of whiteness suffers from an “optical illusion”: that religion is one place where there is equality in America."https://t.co/oBexCPqsJx

Joshi said during the virtual presentation, attended by The College Fix, that she noticed while in school that research on whiteness in America often missed the “explicit role of religion in the development of whiteness.” 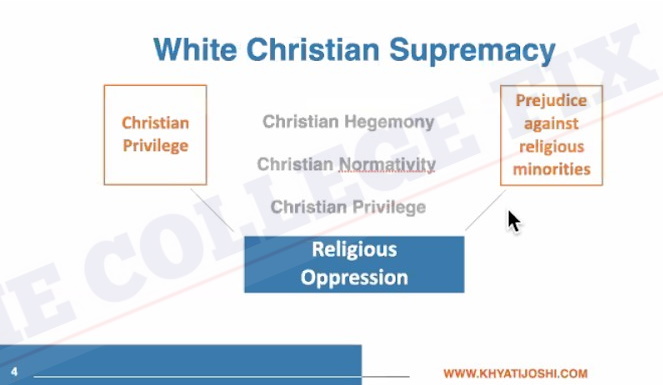 When talking about this history of the country and privilege “we should talk about Protestant Christian” privilege “because the United States has a long and drawn-out history of anti-Catholicism.”

Christian privilege is part of “white Christian supremacy,” according to one slide that Joshi used.

This form of privilege is made up of Christian hegemony, normativity and privilege. Christian privilege, according to Joshi, is “a product of systemic religious oppression over the history of this country.”

In her presentation, Joshi said that court cases on the religious freedom of non-Christian religions is indicative of Christian privilege. 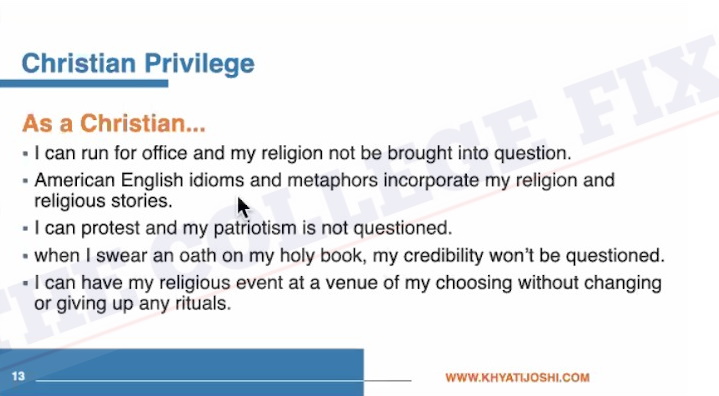 Joshi pointed to three cases to prove her point, including Goldman v. Weinberger, a 1986 ruling where the Supreme Court allowed the military to prevent an Orthodox Jewish military officer from wearing a yarmulke while serving.

She also discussed Employment Division v. Smith, where the Supreme Court ruled in 1989 against two drug counselors who the state of Oregon fired after they tested positive for drugs after ingesting peyote.

She cited a 1988 Supreme Court case, Lyng v. Northwest Indian Cemetery, where the court ruled that Native Americans did not have a religious right to prevent the harvesting of timber on lands they considered sacred.

Joshi did not respond to several emailed requests for comment from The College Fix for clarification on why counter-examples were not discussed in her presentation. She told The Fix on Thursday via email that she would provide a comment, but did not respond by Thursday evening.

Joshi later responded on September 18 to The Fix via email.

“Every person who runs for office is going to be questioned about their faith. My point was that it’s the religious minority candidates who face the situation where their religious identity may be used to call into question their ability to represent their constituents,” Joshi said, in response to a question about Christian candidates who have had their faith challenged.

In her email, Joshi explained the difference between individuals seeking to stop the law from oppressing them and “litigating for the right to enforce your faith on your employees and your neighbors.”

“It’s the difference between seeking the right to practice one’s own faith, and the right to enforce it on others. What’s remarkable about the Hobby Lobby decision is that the Supreme Court found that, yes, Christians have a legal right to enforce their faith on others without legal penalty,” Joshi said.

Non-white Christians can have privilege, too

On the topic of non-white Christians, Joshi said that they can sometimes have privilege.

Christian communities of color “also have Christian privilege” but “when we take into account intersectionality … the race element is there.”

Joshi said that “on a certain level, Hispanic Catholics have Christian privilege.”

She added that one way to decrease Christian privilege is actually to embrace religious differences and say things like “Merry Christmas.”

She said she tries to say “Merry Christmas” instead of “Happy Holidays” with the hope that other people will respond by wishing non-Christians a happy celebration of their holidays.

Additionally, Joshi did say that one way to understand each other better is for people to look at their “sphere of influence” and consider if they were only talking to people like them.

“We’re not going to make change only listening,” the professor said; instead “we have to get close to some of the challenges we need to solve” and examine the “sphere of influence.”

While the director of the Center for Security, Race, and Rights, Sahar Aziz, agreed with that statement during the presentation, she did not respond to several emailed requests from The College Fix since Wednesday asking for comment on Christian privilege and if she planned to host people with different views at the university.

Professor Joshi emailed The College Fix on September 18 and said “[s]chools are very hesitant to deal with the topic, for reasons I talk about in my book,” but noted that several years ago “students from Drew University and their professor were successful in teaching a world religions class at Madison High School.”

Future topics in the lecture series from the center, which focuses on the experience of “Muslim, Arab, and South Asian communities,” includes a presentation on sanctions against Iran and another presentation about counterrorism in Somalia.

Americans United for Separation for Church and State will host Joshi next week as part of a panel on “dismantling white privilege” and “Christian nationalism.”

Editor’s note: Professor Joshi e-mailed The College Fix on September 18. The article has been updated.