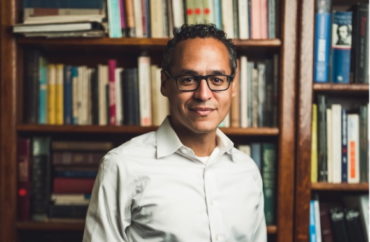 Roosevelt Montás, senior lecturer in American studies and English at Columbia University, emigrated as a boy from the Dominican Republic to Queens, New York. There, his curiosity and love of learning led him to seek out novel educational opportunities – even salvaging a 2,400-year-old philosophy classic out of a pile of trash.

Montás told this story from his new book, “Rescuing Socrates: How the Great Books Changed My Life and Why They Matter for a New Generation,” in a recent discussion with Benjamin Storey and Jenna Silber Storey of the American Enterprise Institute.

As a new American still learning English, Montás said, “I struggl[ed] as many poor immigrants have done and do, and I came across a book that my next-door neighbors had thrown out…a volume of Plato’s “Dialogues,” surrounding the trial and death of Socrates. I started reading it with a kind of earnestness, a kind of intensity.”

“One of the things back in the Dominican Republic that you hear [is that] Americans throw away perfectly good stuff all the time. You can pick up TVs, dressers, beds, air conditioners. …It’s treasure.”

In picking up the beginning of his liberal education on the street, Montás literally recovered a cornerstone of the Western cultural inheritance that our educational elites have all but thrown away. Plato’s “Dialogues” covers the last days of the ancient Greek philosopher Socrates, who defends his moral mission of pursuing truth through questioning, even as a jury condemns him to death.

“When I encountered this book,” Montás said, “that was the treasure that I came to America to find.”

In “Rescuing Socrates,” part memoir and part philosophical text, Montás relates his own coming-of-age story through a liberal education that began with Plato in the trash heap and blossomed at Columbia University’s undergraduate Core Curriculum program, one of the last required “Great Books” programs in the country. Students meet in seminars to read classic, historic texts in literature, philosophy, history, music, art and science. The program introduces students to masterpieces foundational to Western and global civilization.

“Great Books,’ Montás said, “is one way of naming works for our past that have had an outsize influence on the way our world is today. Works that have impacted the world in such a way that we can trace their influence, we can see the ways in which they have put into circulation debates, categories, positions.”

Reading these books provide a “liberal education” – one which “concerns our condition as free, self-determining individuals,” Montás said.

“That first year at Columbia was a very difficult time, a bewildering time…Reading those books was the primary way through which I began to orient myself…vis-à-vis my own coming of age, my sense of myself as an individual, as an agent, as a member of American society, as a member of a democratic society.”

Montás went on to receive a Ph.D. in literature at Columbia, teach Core Curriculum courses in philosophy and American studies, and direct the university’s Freedom and Citizenship high school enrichment program. He also directed the Core for a new generation of Socratic truth-seekers. “Rescuing Socrates” is in part a defense of this kind of liberal education against its academic detractors.

Montás opposes university leaders who have rejected the Great Books in favor of programs emphasizing professional or academic specialization. Liberal education, he said, is “that fundamental type of cultivation and education that equips you to fulfill any particular professional role to its maximum potential.”

He also defends a Great Books, liberal education against progressive critics who have rejected it out of a view that it is a vestige of elitism or a tool of domination.

Precisely because liberal education teaches self-examination and and prepares one to govern society — which is why, in the past, it was reserved for the ruling class — it should now be an education for every democratic citizen, Montás said.

“I see liberal education as a liberatory practice, as a practice of equipping an individual to win a life of freedom.”

And to a listener to the interview who posed the question, “Liberation for what?”

“Liberate you to maximally develop your human capacities,” Montás answered.

“To be driven by appetite is slavery,” he said, paraphrasing another philosopher, Jean-Jacques Rousseau, “and to obey the laws we have formulated for ourselves is freedom.”