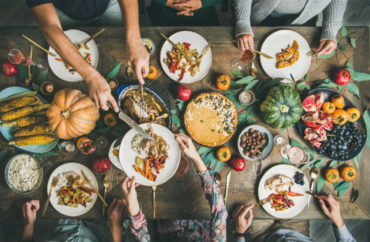 Advises students on how to ‘indigenize your Thanksgiving menu’

An assistant professor of anthropology at Indiana University of Pennsylvania recently talked to students about how to “decolonize” their Thanksgiving, arguing that the traditional pilgrims and Indians story is a false narrative that perpetuates harm and racism.

Professor Abigail Adams argued that “unlearning some of the myths that we’ve learned about Thanksgiving” is important because “they continue to perpetuate harm and misinformation about native people and continue to keep native people of the past… [so that they’re] not seen as real, contemporary people.”

She told students attending the online workshop that while the “Thanksgiving myth” has elements of truth, “we have to be honest about how America has treated indigenous people and we have to acknowledge that indigenous people continue to suffer in internal colonies or reservation systems as we call them in the United States.”

“And,” she added, “we have to acknowledge during Thanksgiving that we have inherited a land that is not rightfully ours because it was never ceded. It was essentially stolen from indigenous people.”

“This isn’t just a conversation about us getting the Thanksgiving story right,” she said. “This is a story about us acknowledging contemporary Native American people and to acknowledge that they also continue to suffer ongoing colonialism.”

Adams, who is also chairperson of the Native American Awareness Council at Indiana University of Pennsylvania, began her “Decolonize Your Thanksgiving” lecture, hosted by the Center for Multicultural Student Leadership and Engagement, with a land acknowledgement.

Part of it states: “We acknowledge that this land was founded upon exclusion and erasure of many indigenous people. This acknowledgement demonstrates our commitment to continuing the process of working to dismantle the ongoing legacies of … colonialism and we acknowledge our responsibility to work for equity, justice and reparations for native people of this land and for all of America.”

“I think it’s appropriate to [read a land acknowledgement] anytime we gather on indigenous land—unceded indigenous land, which is pretty much the entirety of North America,” she said.

During the one-hour lecture, Adams told the virtual audience of about 40 students that the pilgrims did not come to the United States in search of religious freedom but “as part of a commercial venture.”

She said that the establishment of Thanksgiving as a national holiday was also “a capitalistic enterprise of sorts.”

“One of the first official days of Thanksgiving was proclaimed… [as] a celebration of English settlers returning from Mystic, Connecticut, after they had massacred a Pequot village. That is the original harvest festival upon which Sarah Hale wanted to build the idea of Thanksgiving,” Adams said. “She was an editor of a popular magazine of the mid-1800s, convinced President Lincoln to establish [Thanksgiving] as a holiday, as a national holiday … [and] printed Thanksgiving recipes and menus in her magazine and published close to a dozen cookbooks, many of them on Thanksgiving.”

However, Adams stated that she was “in no way recommending” Thanksgiving be abolished.

While she encouraged students to read “The Suppressed Speech of Wamsutta James,” Adams cautioned them against sharing it with their families this Thanksgiving.

“I do not recommend—unless you have very open-minded family—that you read the Suppressed Speech of Wamsutta James at your Thanksgiving this time,” she said. “Do lay the brick work, do the work. Maybe in a couple of years you can read the Suppressed Speech of Wamsutta James; I don’t want you to just ‘flip the tables’ so to speak, but, of course, it’s important for us to decolonize our minds before we enter into this Thanksgiving season.”

Identifying herself as a food scholar among other titles, such as a human rights scholar and indigenous studies scholar, Adams told students that “one of the things you can do that is not typically appropriative is eat indigenous food.”

“How do you indigenize your Thanksgiving menu? First off, you need to acknowledge … that the vast majority of the food we eat today came from indigenous America,” she said. “You have to understand that food isn’t just calories. For indigenous people, it is a gift that comes from the creator. … Acknowledging food as a gift from the creator is something we can all do if you practice any type of religion.”

After describing the “decolonial cuisine” movement and indigenous concepts of “food justice,” she suggested several foods students could eat as part of an “indigenized menu,” such as “amaranth corn pudding,” “wild rice cakes” and “avocado casserole.”

MORE: Universities teach students how to ‘decolonize’ their Thanksgiving