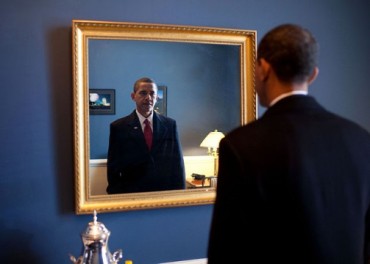 In The Washington Post, Jonathan Zimmerman, a history professor from NYU, has written an article claiming that all of America’s problems would be soloved–GET THIS–if only we would allow Barack Obama to run for a third term!

He wants to amend the Constitution and abolish presidential term limits.

Zimmerman writes that Obama–whose approval rating is at an all time low of 37%–would be much more effective at governing if he could stand for re-election in 2016 because then he’d be less likely to “ignore” the will of the American people. “It’s time to put that power back where it belongs,” he writes. “Barack Obama should be allowed to stand for re election just as citizens should be allowed to vote for — or against — him. Anything less diminishes our leaders and ourselves.”

We don’t know whether to shake our heads in disbelief, or burst out laughing.

This professor admits that only a third of Americans approve of the job Obama is doing in office, yet he wants us to believe that we’d be better off if he were able to be president until the year 2020–and beyond?

Just one week ago, the very same newspaper ran a story predicting that if the 2012 election were held now, Mitt Romney would win the White House, not Obama.

Right now, this country has a serious case of voter’s remorse. Therefore the timing for this call for a potential third Obama term couldn’t be worse.