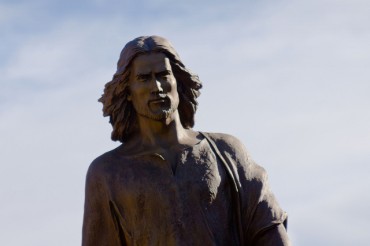 A recent guest lecture at Swarthmore College by a prominent homosexual seminary professor highlighted a growing argument among the so-called queer community that Jesus was bisexual.

In particular, the Rev. Patrick Cheng, a professor at the Episcopal Divinity School in Massachusetts, told the students that Jesus was a subversive person and God’s way of “queering the world,” so to speak.

Cheng said Christ was “always coming out in the gospels” and that “Christ is God coming out.”

Cheng, author of the 2011 book “Radical Love: An Introduction to Queer Theology,” as well as “From Sin to Amazing Grace: Discovering the Queer Christ,” published last year, argues queer theology essentially takes its cues from Jesus, who Cheng described in his speech as the ultimate boundary crosser.

“Queerness is at its heart radical love,” he said.

Cheng, who holds degrees from Harvard, Yale and Union Theological Seminary, and also blogs about religion and homosexuality on Huffington Post, emphasized during his speech that feminist and queer theorists such as himself build theology from their own experience.

In fact all of the theology he spoke of in his presentation, according to a student who attended the lecture for The College Fix, seemed to relate directly back to his life as a queer Asian male.

At one point he was asked by an audience member about the role of the Bible. Cheng conceded different types of Christians emphasize scripture, tradition, reason and experience differently, and hinted he values all those things, but said emerging theology prioritizes experience, especially for “marginalized people.”

Cheng’s talk highlights a growing trend among the homosexual community that argues Jesus was bisexual.

In a March 2011 op-ed on Huffington Post, Cheng noted “Jesus Christ’s earthly ministry also reinforces the notion of Jesus as the embodiment of radical love and boundary-crossing.”

“Jesus Christ is the embodiment of radical love because – in addition to crossing divine and social boundaries – Jesus also crosses sexual boundaries,” Cheng wrote. “This is, Jesus’ life and ministry can be viewed as dissolving the rigid line between ‘heterosexual’ and ‘homosexual.’ ”

In his piece, Cheng cites the Rev. Nancy Wilson’s argument that Christ was likely bisexual, quoting from her book “Our Tribe: Queer Folks, God, Jesus and the Bible” that “the most obvious way to see Jesus as a sexual being is to see him as bisexual in orientation, if not also in his actions.”

In addition to Cheng and Wilson, another prominent theologian to posit this theory includes lesbian Christian author Rev. Kittredge Cherry. She blogged on the Huffington Post last March that “nobody knows for sure whether the historical Jesus was attracted to other men or felt like he was female inside.”

“Some progressive Bible scholars do argue that Jesus had a homosexual relationship,” Cherry notes. “Chicago Theological Seminary professor Theodore Jennings presents the most fully developed explanation in his book ‘The Man Jesus Loved.’ Queer Christ images are emerging now in theology books, at art galleries, on stage, in churches, and across the World Wide Web.”