Greg Pingree was an adjunct professor at the University of Florida teaching a class called “Law, Religion, and Sexual Identity” when a student asked him a provocative question.

“It isn’t transphobic to think trans women are not women, right?” the student allegedly asked Pingree during a private Zoom conversation in April.

“It’s not transphobic, it’s just your view, and I welcome you to express that in my class,” Pingree allegedly responded.

Pingree then sent a copy of the discussion to the whole class, according to a bias complaint filed with the University of Florida’s RESPECT Team.

“Professor Pingree claims the recording and delivery was an accident and has since removed it, but it was very upsetting to hear a UF Law professor defending and encouraging discriminatory and hateful anti-transgender remarks,” wrote the student who reported the professor.

Pingree did not respond to multiple requests by The College Fix to comment for this story.

The incident was one of 18 reports filed since 2019 with the RESPECT Team, which serves as the school’s bias and hate crime reporting system.

The College Fix recently obtained copies of the reports through an open records law request. In many cases, the names of both the individuals filing the reports and those targeted by the reports have been redacted to protect their identities.

That year, The College Fix profiled UF, whose cases at the time included reports filed against a grumpy professor, a racist Snapchat from someone unaffiliated with the school, and a student who said they were kept out of a fraternity because they wore socks touting a political candidate.

“The purpose of the RESPECT Team is to provide impacted parties of bias incidents opportunities to be heard and supported; understand and respond to situations that affect the University of Florida; educate and inform the community; and create awareness of ignorance and intolerance,” said UF Issues Management & Crisis Communications Director Hessy Fernandez in an email to The College Fix.

“The RESPECT Team provides services to witnesses, bystanders, targeted individuals, offenders, or members of the community. The RESPECT Team does not investigate, adjudicate or take the place of other UF processes or services. Rather, the RESPECT team complements and works with campus entities to connect impacted parties and communities with appropriate support and resources,” Fernandez said.

In the reports filed since 2019, sexual identity was also an issue at UF when the school’s Counseling and Wellness Center contracted for a mental health story hour with local drag queen Sandi Perls (pictured). 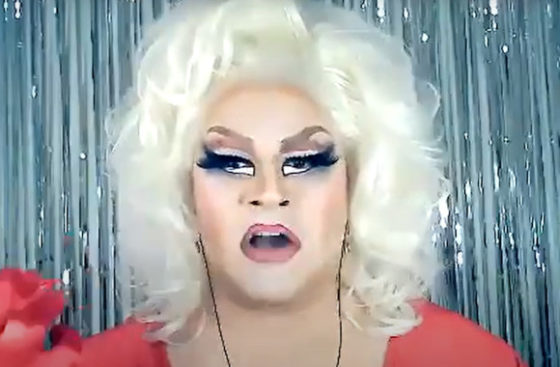 According to a bias report filed by UF Assistant Director of Residence Life and Education Jason Fraser-Nash, there was “chatter” on Facebook regarding Perls’ agreement with the school.

But Fraser-Nash told The College Fix he didn’t have any information about what specifically was said.

“I did my due diligence and submitted the report based on the information I received,” Fraser-Nash said in an email to The College Fix. “There was not enough available information for any additional follow-up.”

It wasn’t the first event Perls had participated in with the school. In February, Perls filmed a one-hour interview with the Counseling and Wellness Center called “Being Fabulous with Sandi Perls.” The YouTube video has been viewed 51 times.

Another report was filed against Dana Lynn Myers, an undergraduate advisor in the school’s art department. In a jumbled diatribe, a student accused Myers of “ableism” for “basically outlining every way shape and form she categorically rejects student’s [sic] literal basic human decency in a way that made me feel like an animal.”

The student also said they reported Myers to the campus police department and the CWC. The school did not contact Myers after the complaint was filed.

“The Respect Team followed its process,” Fernandez said about the Myers report.

-During a Zoom meeting hosted by the Counseling and Wellness Center and the campus LGBTQ+ Affairs Office in December of last year, an individual going by the name “Jahseh O” jumped in and began saying things like “Epstein didn’t kill himself” and “cells interlinked.”

“Though the content of the Zoombombing appeared not to be LGBTQ specific…the person’s actions were intended to disrupt LGBT related research,” the complainant wrote.

-Also in December, a white female student posted two TikToks of herself dancing and lip-synching to rap lyrics that contained the “n-word.”

“Please address this ASAP,” wrote the complaining student. “She clearly does not care about saying this word which is really concerning and outright racist…she must face consequences as this word isn’t to be used by a non-black person.”

-At a party in April this year, a female student “used and repeated” the “f-word” to refer to gay men, while gay men were present.

“She has merely offered apologies without remorse,” the complaining student wrote. “I would like action to be taken in the form of a required Bias workshop with the MCDA (Multicultural & Diversity Affairs) or a productive conversation with a staff member that can serve as an equivalent.”

MORE: Recent bias complaints filed at U. Florida cite a grumpy professor, a racist Snapchat, and a crass joke