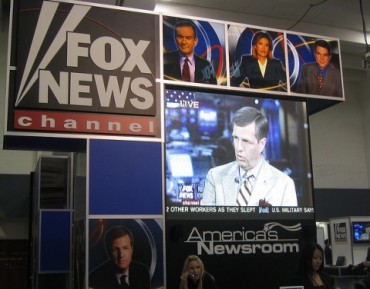 People who watch Fox News are less informed than people who get their news from other outlets such as MSNBC and CNN, a University of Arizona professor told his upper-level government class recently, according to a recording of the comments obtained by The College Fix.

The student who taped parts of Associate Professor Pat Willerton’s “Politics, Policy and Governing: The U.S. and the World” class on Oct. 8 said the remarks were couched in a larger argument that Fox News is a propaganda arm of the Republican Party.

The 25-second clip provided by the student, who asked to remain anonymous, starts right after that assertion about Fox News and the Republican Party, a remark that prompted audible gasps from the large room full of students.

The recording shows Willerton defending his comments as students continued to murmur, saying: “They use government, they use, well – c’mon, look at the studies, look at the studies. If you look at MSNBC, ABC, CNN, all of these cases, the average viewer knows more than the person who doesn’t consult any source. When they survey people who watch Fox News regularly, they know less.”

The “studies” Willerton cited to students to back up his claim was a controversial 2010 survey conducted by the University of Maryland-based WorldPublicOpinion.org that was touted by many left-leaning news organizations as proof Fox News misinforms its viewers.

However, Fox News published a point-by-point refutation of that survey shortly after it was released stating in part “researchers themselves were clearly misinformed and frequently picked incorrect or left-wing biased answers as the ‘correct’ ones.” That was never brought up in Willerton’s class.

The student who provided the clip told The College Fix that the professor often criticizes Republicans in the beginning of his class, which is reserved for remarks on current events before the academic lecture begins. During the first week of October, he told the class Republicans were responsible for the ongoing government slimdown, and on Oct. 8 – the same day he disparaged Fox News – Willerton declared the U.S. House of Representatives is currently controlled by Republicans because of gerrymandering, the student said.

In a second clip provided to The College Fix, Willerton states regarding the House: “You had a relatively even split, how many people voted, one party or the other, actually Democrats had more votes, but as you can see, the Republicans ended up with 33 more seats, and this is very much tied into gerrymandering.”

The student said the professor neglected to mention Democrats, just as much as Republicans, stand accused of gerrymandering tactics by many nonpartisan sources.

“It’s maddening,” the student said. “No one in the class challenges his ideas or questions what he has to say, which is what I find the most discouraging.”

The professor did not respond to repeated requests for comment by phone and email over the last week.

In a statement to The College Fix, University of Arizona spokesman Chris Sigurdson defended the professor’s actions, calling them appropriate.

“It would be remiss for a professor of comparative politics and policymaking not to use the relevant examples of the day,” Sigurdson said in an email. “He is clear about when he’s citing published research and when he’s offering insights based on his expertise. He encourages students to ask questions and add comments during the lectures. He also uses Twitter in class to solicit differing views and questions from those who may not want to speak out.”

Sigurdson said the professor posts Tweets in class that disagree with things he said or things students have thought he said, as well as follows up with the proper academic citations.

“There are 542 students in the class and, based solely on the numbers, the professor acknowledges that some part of his lectures are likely to affront or engage some portion of the students at any point,” Sigurdson said. “To all indications, he is conducting the class responsibly and within his authority and expertise.”

Watch a video of the professor’s comments about Fox News viewers:

ProfClip1 from The College Fix on Vimeo.

Watch a video about the professor’s comments on alleged Republican gerrymandering:

ProfClip2 from The College Fix on Vimeo.