A professor at Bucknell University tweeted out last week that he wished death on Rush Limbaugh.

Michael Drexler, a professor of American literature, posted on Twitter: “Rush Limbaugh is one of the worst people to ever walk this planet. He is a scar on this nation, deserving only to be plucked out and fed to eagles. Medal of shame. Badge of dishonor. Death, thou too shalt die!”

Rush Limbaugh is one of the worst people to ever walk this planet. He is a scar on this nation, deserving only to be plucked out and fed to eagles. Medal of shame. Badge of dishonor. Death, thou too shalt die!

The College Fix got in contact with a Bucknell University spokesperson, who stated, “The Twitter accounts of Bucknell employees represent their personal views and not the views of the university.”

The Limbaugh tweet is not the first time Drexler has taken to social media to vent against conservatives.

Recently he tweeted about how he questions the humanity of several prominent Republicans who defended President Trump. And he called Republican Sen. Marco Rubio a “maggot” on Twitter after the lawmaker criticized Speaker Nancy Pelosi’s decision to rip up a copy of Trump’s State of the Union speech.

Cipollone, Nunes, Guiliani, and the list goes on of all of those who have stood up to lie directly to the American people about their involvement in Trump's drug deal. I cannot fathom the humanity of such people. Dangerous thought, yes. But I sincerely struggle to get it.

Last year, he posted multiple attacks on Pennsylvania Republican Rep. Fred Keller, whose district includes the city of Lewisburg, where Bucknell is located, insinuating in one that he should be hanged. Drexler deleted these tweets, but The Fix obtained screenshots of them. 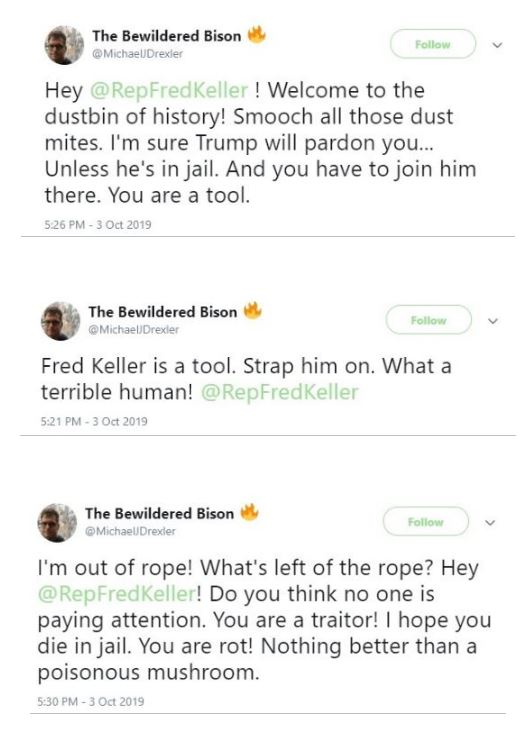 Bucknell University sociology Professor Alexander Riley, who is well-known as a conservative scholar on campus, told The College Fix he filed an HR complaint against Drexler for calling him a “white supremacist skinhead” on Facebook.

He said Drexler called him that on a page used by a large number of Bucknell faculty, and though the university took no action due to the attack not taking place on official school media, according to Riley, “the potential effects on my reputation among Bucknell colleagues (were) significant.”

Asked about the situation by The College Fix, Drexler said “It is an internal personnel matter at my employer.” On Twitter, Drexler posted on Jan. 30: “For those interested … I was accused of bias for calling out a white supremacist faculty member on a Facebook post totally unrelated to my employment. It took 4 and a half months, but I’ve been totally exonerated of wrong doing.”

For those interested…I was accused of bias for calling out a white supremacist faculty member on a Facebook post totally unrelated to my employment. It took 4 and a half months, but I've been totally exonerated of wrong doing.

According to Riley, other colleagues have taken heat from Drexler, too.

“What’s happened over the past few years is that he has made a frequent practice of vicious and uninformed attacks on a faculty group that I co-direct, the Bucknell Program for American Leadership and Citizenship,” Riley told The Fix, “and that has now expanded into the personal attacks on me.”

Riley said that his personal interactions with Drexler are minimal, that he “doesn’t know me at all beyond the very most superficial level, and even that only professionally.”

Last year, Drexler invited Miko Peled to speak at Bucknell University. The decision was deemed “controversial,” as the Bucknellian reported at the time, noting “Peled’s arrival sparked controversy among the student body. Peled is an outspoken critic of the Israeli government and has been accused of characterizing Israel through anti-Semitic tropes and rhetoric.”

Drexler himself is a member of the Academic Advisory Council for the Jewish Voice for Peace, or JVP, which is described by the Anti-Defamation League as “a radical anti-Israel activist group.”

In contrast to the Peled controversy, Drexler was openly critical when the Bucknell Program for American Leadership and Citizenship hosted conservative speaker Heather Mac Donald for a guest lecture in November 2019.

He told the Bucknellian: “I don’t see how her presence here makes campus better. But if there are people who wish to give her a platform, let them take responsibility for paying for it themselves. And don’t expect the campus not to react negatively.”

In fact, Mac Donald’s lecture was met with blacklisting, vandalism and a picket line.