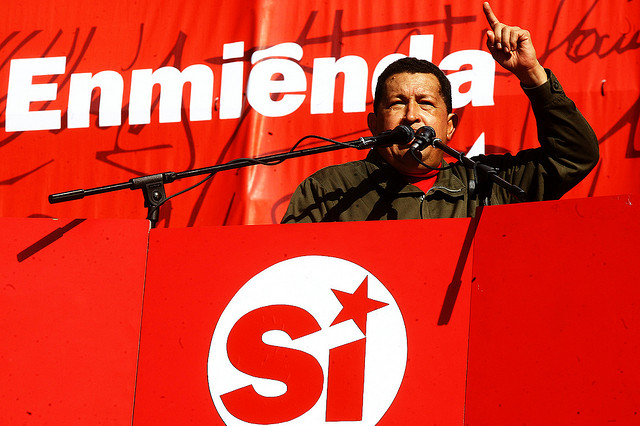 Several professors on Tuesday lauded Hugo Chavez in the wake of his death, describing him as the crusher of oligarchies, a great humanitarian, and a fearless leader who brought hope to the poor.

“He gave hope and a viable political alternative to Venezuela’s ‘descamisados,’” Dennis Bixler-Márquez, director of the Chicana/o Studies Program at the University of Texas at El Paso, said in an e-mail to The College Fix.

Bixler-Márquez, who has visited Caracas, said Chavez “alleviated poverty to a significant degree, although the challenge is still overwhelming, not to mention the magnitude of the political opposition by the traditional oligarchy.”

Chavez, the embattled socialist president of Venezuela for the last 14 years, died Tuesday of cancer.

Chavez had many detractors while he led the country, which grapples with high crime rates, a stagnant economy and extreme poverty. Some have accused him of using the millions of Venezuelans dependent on government aid programs, coupled with his control over the country’s media, to stay in power.

But several university academics Tuesday hailed the man as a revolutionary who helped the South American country become a better nation.

Christopher Boyer, associate professor of history and Latin American studies at the University of Illinois at Chicago, acknowledged that the Chávez administration “tended to repress dissenting media outlets and flirted with dictators.”

Nevertheless, he added, Chavez’s rise to power was a “watershed” moment in the country’s history, as it ended “the oligarchy that had enriched itself by controlling Venezuelan governance and oil reserves for much of the twentieth century.”

“Chávez used the nation’s oil wealth to build human capital, enhance educational opportunities for the poor, and provide human services that many people would never otherwise have enjoyed,” Boyer stated in an email to The College Fix. “Chávez used oil wealth, anti-imperialist ideology, and his considerable rhetorical skills to argue that South America could become more tightly knit together.”

“While it is possible that his successors will continue to push for a fairer distribution of Venezuela’s oil wealth, I suspect that no one can replace his leadership as a Bolivarian visionary.”

For Héctor Perla Jr., assistant  professor of  Latin American and Latino Studies at the University of California, Santa Cruz, “Chavez not only gave hope to the poor and historically discriminated of Venezuela, but to all of  Latin America.”

“He gave them hope that their current plight wasn’t all that they were destined for, that their children weren’t preordained to live in squalor, that they had a right to demand more from their governments, and he inspired them to believe that they themselves, through their organized actions they could achieve a better future,” Perla stated in an email to The College Fix.

“His defiant style as much as his message was important because he rose to international prominence at the height of free trade market orthodoxy (i.e. neoliberalism) (which) was proclaiming to the poor of the world ‘There is no alternative.’ It struck a resonant chord with the disempowered who saw in free market capitalism not the answer to their underdevelopment, but the cause.”

Jennifer Kabbany is Associate Editor of The College Fix.