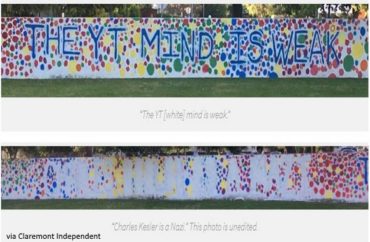 A prominent and respected conservative scholar at Claremont McKenna College was the target of a Nazi slur through a large painted message on a campus free speech wall.

The words “Charles Kesler is a Nazi” and “The YT [white] mind is weak” was painted in large blue capital lettering on a lengthy free speech wall that flanks a campus quad at Pomona College, one of five schools situated next to each other in a consortium cluster that includes Claremont McKenna, Scripps, Harvey Mudd and Pitzer colleges.

Kesler, a government professor at Claremont McKenna since 1983, is editor of the Claremont Review of Books, a senior fellow at the Claremont Institute, and among POLITICO’s Top 50 in 2017 for his “strain of American conservative thought that offers some support for Trump’s ideas.”

The slur publicly issued against Kesler came less than two weeks after it was announced that he was a recipient of the highly prestigious 2018 Bradley prize, given to individuals who work to “restore, strengthen, and protect the principles and institutions of American exceptionalism.”

Kesler declined to comment to The College Fix on the free speech wall incident.

The slur was discovered Friday morning and by mid-afternoon administrators announced they had decided to cover it up, calling it “an offensive message directed at an individual.” Although the attempt to cover the slur with white paint has left the message still clearly discernible, reports the Claremont Independent.

Moreover, officials left up the “The YT [white] mind is weak.”

It is unknown who painted the messages, whether it was one student or a group of students, and whether the wording was influenced by left-leaning scholars among the Claremont colleges.

Alec Sweet, co-editor in chief of the Claremont Independent, told The College Fix he does not know why Professor Kesler was targeted.

“I know of nothing he may have done that a reasonable person would see as controversial. He recently won the prestigious Bradley Prize, but I cannot see why that would cause a reaction such as this. If I had to guess, the simple fact that he is a prominent, out-spoken, conservative professor would be the only reason for this slur to be written,” Sweet said.

Sweet, who has taken one of Professor Kesler’s classes, said he is an outstanding scholar.

“Anyone who has ever talked to Kesler will know that he is an extremely upstanding and intellectual man,” he said.

And Claremont McKenna College student William Newman told the Independent that calling Kesler a Nazi “would probably make him chuckle because he knows that he is the farthest thing from it.”

“Having been in Professor Kesler’s classes, he is one of the few individuals who fosters and encourages intellectual curiosity for its own sake. Moreover, Charles Kesler cultivates the soul. When I say the soul, Professor Kesler seeks to challenge one’s assumptions and beliefs through rigorous intellectual inquiry. His concern moves past the mind and into the moral character of his students, asking them to develop their own system of values with curiosity, depth, compassion and good cheer. He believes in the foundations of Western liberalism and that the key to enlightening individuals is through education, debate, free speech and exercising free will. Any notion that the man would desire to impose his beliefs on others is simply preposterous and if others find his ideas challenging their own, I know he would gladly field their questions and concerns. Nazism is rooted in intolerance of others. Charles Kesler remains one of the most respectful and profound thinkers of the Claremont Colleges and most likely in the United States. He defends conservatism because he believes in it. … To call him a Nazi is disrespecting an individual who values free speech, justice, liberty and the contest of ideas,” according to Newman.

As for the decision to paint over the slur, Sweet noted that the free speech wall is just that.

“I think that the decision to paint over the slur was wrong. As Professor Kesler can be considered a public figure, it should be protected speech, especially on a so-called ‘free speech wall,’ even if the message is something we extremely disagree with,” he said.

Same goes with the other message.

“I think that the school made the right decision to leave the anti-white message up,” Sweet said. “It should be protected speech, even if the content is abhorrent and racist. I am ashamed that someone at such elite institutions would think that writing this message is acceptable however.”