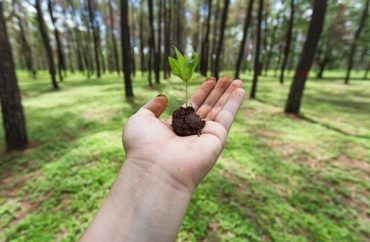 This is definitely the most creative excuse for censorship and retaliation I’ve ever seen.

The University of Mary Washington is now claiming that it zeroed out the print budget for The Blue & Gray Press to save the planet, not because the student newspaper’s content offended student leaders and administrators, as suggested by their earlier comments.

In a May 10 Facebook post that sits awkwardly between saccharine graduation-related posts, the Virginia taxpayer-funded liberal arts school said it “believes in freedom of the press and in stewardship of the environment”:

Distribution problems have led to stockpiles and wasted copies of The Blue & Gray Press. Thus, students made the decision to withhold funding for printing of the newspaper. Conversations about ways to remedy these issues are ongoing. The Blue & Gray continues to publish electronically.

Commenters on the Facebook post are largely not buying it. One of them called out the university for hypocrisy in its own self-interested use of paper.

The administration can’t even keep its excuses straight, with a spokeswoman telling The Free Lance-Star that the “door is still open” to funding the print run through another method.

It is also trying to portray the decision as student-led, not something that involved the administration, though a senior administrator sits on the student finance committee, which flatly refused the paper’s $13,665.12 print request and instead gave it $100 for office supplies.

It was Assistant Dean for Student Involvement Melissa Jones (below) who wrote in an email that the print request could be reconsidered after a task force on “quality” issues recommendations:

UMW spokeswoman Anna Billingsley said other students simultaneously expressed concerns about “how the Blue and Gray was reporting news” and with the newspaper’s grammatical problems, but called that a “totally separate issue.” …

University officials said Student Government Association President Matthew Good proposed the task force after he and other SGA members heard concerns about The Blue & Gray Press. But they said it had not been formed and indicated that the newspaper, not the SGA, would be the one to create any such task force.

The Student Press Law Center reports on the “consistently troubled relationship” between The Blue & Gray Press – known as the politically incorrect Bullet until four years ago – and the student government, and occasionally the administration as well.

Eight years ago it published mugshots of 15 students charged in a drug investigation:

“When we published that story, the student body had this huge backlash,” [then-Editor-in-Chief Lindley] Estes said. “They were really upset we would write about the student body like that.” …

Criticism of the article got so bad that Estes was anonymously threatened shortly after publication of the article. Someone taped a note on her off-campus apartment door that read, “Karma’s a bitch, And SO ARE YOU.” …

Ryan Marr, editor-in-chief during spring 2011, said that finances were never directly threatened under his tenure, but “it was always a string that was dangled.” In January 2011, The Bullet had to retract an article about a falsely-reported plan by UMW to demolish a historic on-campus building. Marr said that administrators told him that if his paper didn’t improve their journalism practices funding would be pulled.

In a statement published by SPLC, Paino used a variation of President Trump’s “both sides” comment about the Charlottesville violence last summer:

The questions arising about the future of the printed version of The Blue and Gray Press point to the dedication and commitment of students on both sides of the issue. Student members of the newspaper and finance committee have been vested with vital duties, and both groups are attempting to uphold their roles responsibly. The administration will be available to facilitate their dialogue as they work through their differences and seek the best solution. Ideally this experience will provide students with an opportunity to exercise civil discourse and to problem solve in a way that prepares them for their professional life after UMW.

The SPLC is planning to send a warning letter to the administration “that explains the legal boundaries and past court rulings,” according to the student journalism defense organization.

Blue & Gray Press Editor-in-Chief Lauren Closs and Lauren Ruhlen, finance committee chair, are planning to meet to discuss revisions to distribution practices and avoid a court battle. The chair would have to call an emergency meeting of the committee in order to restore the print budget, according to SPLC.