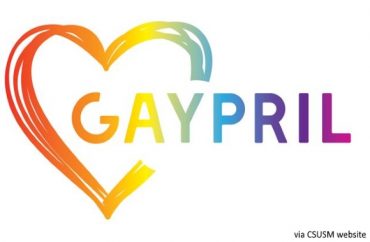 A discussion scheduled for later this month at California State University San Marcos appears slated to delve into the wild world of animal-based sex fetishes.

The event, “Furries Vs. Pet Play,” is one among many slated as the campus marks “gAyPRIL,” billed on the school’s website as a monthlong campuswide celebration of the lesbian, gay, bisexual, transgender, questioning and ally community.

A brief description of the 50-minute discussion, set for April 25 at the campus LGBTQA Pride Center, states on the university’s website: “How much do you know about these two groups? Do you know that they are two different fish in a pond. Come find out why in this weekday discussion.”

Online definitions of “furries” vary, but basically it’s a group of people who enjoy dressing up in human-sized animal costumes. They like to call themselves a “community” and often get together through large conventions. Not all furries turn their fascination into a sexual thing, or have sex in their costumes, but plenty do.

Cal State San Marcos’ media relations office on Monday and Tuesday rebuffed and ignored several calls and multiple email requests for comment on the nature of the “pet play” discussion and what specific role it serves in educating and supporting its students. The Office of Diversity, Education Equity and Inclusion similarly ignored several email requests for comment.

The student who alerted The College Fix to gAyPRIL, who wished to remain anonymous, said they felt the observance is a waste of taxpayer dollars, calling it “ridiculous.”

In addition to “Furries Vs. Pet Play,” the campus this month will host: Pride Fest, Take Back the Night, Color Out Hunger Run, Pridefully Political activist training, and a Queer People of Color discussion.

The documentary “Raising Zoey,” which celebrates a 13-year-old “trans activist” encouraged by her mother and older sister to “fight school officials for the right to self-identify in school,” will also be screened.

Another event will discuss queer parenting. Its description states: “There is more than one-way to start a family: sex, adoption, surrogacy, and insemination. We have invited queer community members to tell their stories about their journey in starting a family.”

During last year’s gAyPRIL at Cal State San Marcos, students were invited to a lecture titled “NOT GAY: Sex Between Straight White Males,” described by a university press release as a talk by a UC Riverside gender and sexuality studies professor on how “sex between straight white men allows them to leverage whiteness and masculinity to authenticate their heterosexuality in the context of sex with men.”

“By understanding their same-sex sexual practice as meaningless, accidental, or even necessary, straight white men can perform homosexual contact in heterosexual ways.”