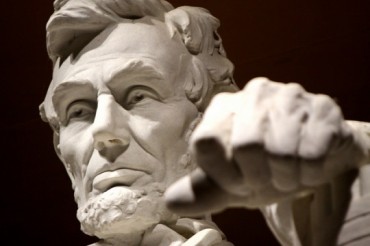 CHICAGO – A public university in President Abraham Lincoln’s home state of Illinois is adorned with a plaque that states Lincoln – arguably the most famous and influential president in American history – was a Democrat.

Lincoln was a Republican.

The plaque, located on a historic building that’s part of Northeastern Illinois University in Chicago and installed in 1905, states: “This building is dedicated to public service honoring the memory of Abraham Lincoln   Democrat.”

When a picture of the memorial recently surfaced on social media sites, it quickly went viral, and prompted anger among many Republicans, who called the dedication not only inaccurate but also a prime example of revisionist history. But the university stands by the inscription.

“According to building archives, the word democrat was used because Lincoln was an advocate for democracy—the political or social equality of all people,” campus officials stated in a press release. “The word was not chosen to reflect a political affiliation. … Northeastern Illinois University recognizes the context that this plaque was created and intends to uphold its integrity.”

One nonprofit advocacy group vows to fight to reword the plaque. Charlie Kirk, founder and executive director of the Illinois-based Turning Point USA, a nationwide young conservatives student movement, said Monday in an interview with The College Fix that “now is the time for removal and replacement.”

Kirk, who drove to Northeastern Illinois University on Nov. 4 to view the plaque for himself, said he has since launched a fact-finding mission determine if the 108-year-old tablet has ever been altered.

“Before we go hard at it we want to know if this is the original plaque, or was it replaced, because it might have eroded due to corrosion,” he said, adding ultimately his group will lobby for its correction.

Kirk scoffed at the notion the word “Democrat” on the plaque simply refers to Lincoln’s social advocacy, as campus officials have asserted. He notes the Democratic Party was active when the plaque was dedicated in 1905, citing President Woodrow Wilson, a Democrat who served in the White House from 1913 to 1921, as one example.

“Any student who walks by that – it’s miseducation in its purest form, whether intentional or not,” Kirk said. “As a citizen of Illinois, my taxes are subsidizing something that is inaccurate. … This is only a microcosm of what is happening every single day at universities across the country.”