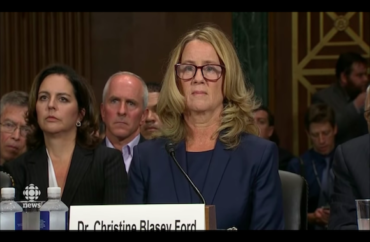 Multiple quotes were painted across campus

Quotes from Christine Blasey Ford’s testimony about her alleged sexual assault at the hands of Brett Kavanaugh were spray-painted on locations across Yale Law School’s campus before some were removed later in the day. Ford’s quote, “Indelible in the hippocampus is the laughter…” was painted across the concrete at the entrance to the law school, The Hill reports.

Entrance to the Yale Law School this morning pic.twitter.com/vRIlGyKRsT

A law student posted the photo, which received more than 35,000 likes and 10,000 retweets. Later in the day, another Twitter user posted an image of the same area with the paint cleaned off.

Entrance to the Yale Law School this afternoon pic.twitter.com/7fONRFWByS

The quote was from Ford’s testimony after Senator Patrick Leahy (D., Vt.) asked her to describe her strongest memory from the alleged incident. “Indelible in the hippocampus is the laughter, the uproarious laughter between the two and they’re having fun at my expense,” the full quote read.

Fox News reports that other quotes were painted across campus as well. They included “I thought Brett was going to kill me” and “I have had to relive my trauma in front of the entire world.”

There were more that I saw too! I wanna know who did it!!! pic.twitter.com/bDcfehVY9k

On Sept. 24, several law classes were cancelled at the law school so students could walk out and protest the nomination of Kavanaugh, who is an alumnus of Yale Law. Several other members of the school’s faculty signed a letter protesting the nomination.

There were also several dozen flyers prominently displayed inside the law school protesting Kavanaugh. They displayed phrases like #IBelieveChristine, #IStillBelieveAnitaHill, #StopKavanaugh, and #DemandingBetter.