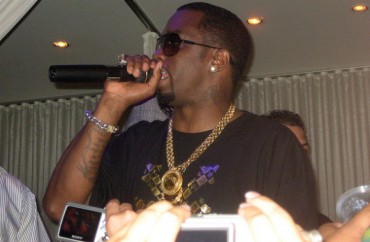 The legendary rap mogul Sean Combs, first known to pre-millennials as Puff Daddy, was charged with “three counts of assault with a deadly weapon, one count of making terrorist threats and one count of battery” at UCLA, the school said in a press release last night.

The deadly weapon? A kettleball.

The melee went down in an athletic building yesterday afternoon. “No one was seriously injured,” the school said.

Combs was released from jail late Monday night, the Associated Press reported. His bail was listed online as $160,000 but officials told the AP Combs only posted $50,000.

Combs’ son Justin is a football player at UCLA. TMZ reports that “Sources connected with Diddy” say that he’s claiming the kettleball attack was in “SELF DEFENSE”:

Diddy insists the drama began during a workout session yesterday because strength and conditioning coach Sal Alosi was “riding Justin badly” and told him not to come back until the end of the summer. …

Our Diddy sources say the coach would not see him and staff told him to leave … but Diddy went to Alosi’s office instead where Alosi told him to get out and threatened to call security if he didn’t leave.

We’re told Diddy insists he grabbed a kettlebell and held it up in a defensive position … but did not attack with an intent to injure the coach.

No word yet whether the “terrorist threat” charge against Diddy is an example of white privilege.