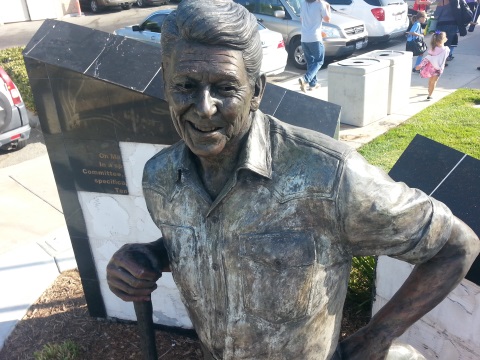 TEMECULA – A bronze statue and marble-tile monument in honor of President Ronald Reagan and his belief in American’s can-do spirit has been hit by vandals, who torched the tribute, which destroyed tiles touting Reagan’s words of wisdom and left the likeness of the president tarnished and defaced. “Whoever did this, they are obviously not in their right minds, and that pun is not intended,” said Perry Peters, president of the nonprofit Friends of the Ronald Reagan Sports Park, whose 75 or so members spent nearly a decade raising private donations to install the $100,000 monument.

The 1-year-old structure is located in a Southern California park named after the president – Ronald Reagan Sports Park – which earned the esteemed moniker because Reagan touted the park as an example of how Americans can accomplish great things without government handouts. When Temecula residents in the early 1980s needed a park in their town they didn’t look to the government, but their own initiative. The park was built with volunteerism, fundraising, private enterprise and positive attitudes.

Reagan, in a 1983 speech before the United States Olympic Committee, praised that effort, saying:

“The folks in a rather small town, Temecula…got together and built themselves a sports park, held fund-raising barbecues and dinners. And those that didn’t have money, volunteered the time and energy. And now the young people of that community have baseball diamonds for Little League and other sports events, just due to what’s traditional Americanism.”

It was those words that were memorialized in the marble-tile wall of the Temecula park monument, but the inscriptional tiles are trashed, destroyed by the blaze’s intense heat. The bronze statue – a figure of Reagan smiling, donning a yellow shirt and blue jeans and holding a shovel – is discolored and scraped up. Peters, in an interview with The College Fix, said raising $100,000 in the midst of the Great Recession was no easy feat, but no government money paid for the park, and ditto for the monument.

Some larger donations – including from several local businesses and private residents, and even $3,000 from Congressman Darrell Issa (R-Vista) – and it finally came together. The groundbreaking was in 2011, and the monument was dedicated in February 2012.

Members of the nonprofit – and many others in the community – are upset over the vandalism. Peters, 81, has talked to many of those folks, and described people as angry, dismayed, indignant and shocked.

“I don’t think this was random vandalism by kids,” Peters said, adding a few months ago the Reagan statue had been pelted with raw eggs as well. “It may have been done by kids, but it was motivated by people who don’t like Reagan and don’t like his message.”

The monument aims to teach local schoolchildren about the legacy of Reagan and the volunteers who built the park, to tout individual initiative and the can-do spirit of Americans, as the nonprofit likes to point to Reagan’s words that “there is no way to better establish hope for the future than to enlighten young minds.”

To that end, the nonprofit also sponsors school field trips to the Ronald Reagan Presidential Library in Simi Valley, has hosted a slab of the Berlin Wall, and organizes can-do essay contests for local elementary schools.

Peters said the group plans to raise money to repair the damage, as well as buy a few security cameras.

Jennifer Kabbany is associate editor of The College Fix. She lives in Temecula.