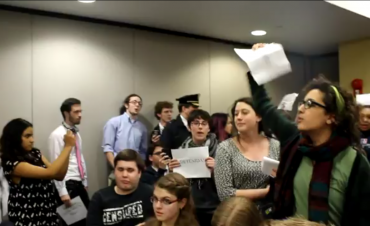 Students in the Occupy movement at American University in Washington, D.C. won a triumph for free speech and respect for other points of view this past week… Oops, wait, that’s not what happened.

What happened is this: The American University College Republicans brought a speaker to campus who happens to disagree with the far left. And Occupy students apparently decided this couldn’t be tolerated.

Republican Governor Jan Brewer of Arizona addressed a packed room of students on February 24th. The audience included both those who were interested in what she had to say, and, it turned out, some who wanted to shut her up. The latter group, apparently organized by the AU Occupy movement allowed her to speak for all of 15 minutes before beginning to scream, “Mic check!” which translated means, “Shut up, stupid conservative!”

Even though many in the audience had gathered to hear the governor speak, they instead had to listen to students scream, “The people, united, will never be defeated,” among other things that weren’t really coherent thoughts. The unruly students also lectured the crowd that “racism won’t be tolerated” at AU.

Brewer is of course known for her tough stance on immigration, and for confronting President Obama publically for his failure to protect the border. She supported Arizona’s bill SB 1070 that gives authorities permission to ask for documentation if one is already committing (or has committed) a crime. Critics feel this will result in unfair racial profiling.

During her 15-minute speech at AU, Brewer largely stayed away from the immigration issue and spoke about pursuing one’s dreams and the importance of doing the right thing even if it’s hard. She also criticized Obama for his failure on the Keystone pipeline.

Thoughtfully considering her comments was never on the Occupy agenda. When they started shouting, Brewer was immediately escorted out of the room. Campus security ordered the protesters to sit down and stop yelling, a directive they ignored completely.

It is unfortunate and embarrassing for American University that they enroll students with such little respect for opinions other than their own. Since Brewer wasn’t even talking about immigration, the goal of AU Occupy was blatantly obvious. They weren’t there, in fact, to protest immigration reform or “racism.” They were there to cause a scene and prevent the other students from hearing what Brewer had to say.

This behavior is thuggish and has no place in an American university. Some would even argue it is illegal, as the Irvine 11 case in Orange County, California demonstrated. If AU Occupy was serious about its accusations of racism, how much more productive would it have been to ask some tough questions and engage in a respectful dialogue on the issues?

Instead, students chose to deny the free speech of another in order to draw attention to themselves. Their behavior is nothing more than a college-aged group temper tantrum.

Watch a video of the chaotic scene:


Fix contributor Emily Schrader graduated from the University of Southern California in December.