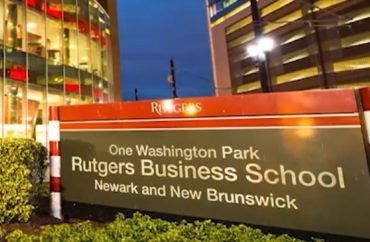 Deidre White, a human resource manager at the public New Jersey university, made the allegations as part of her lawsuit against Rutgers for discrimination. She alleged that Rutgers hires its own students through a temp agency that then assigns them to work at the university. The school then receives a kickback from the temp agency.

“As a result of Defendants’ misleading statistical bolstering, Defendant RBS’s overall institutional ranking is artificially inflated,” the attorneys stated in the lawsuit. “The inflated ranking is false representation to students and potential employers in violation of the Consumer Fraud Act.”

White’s attorneys have not responded to an email on May 1 and May 9 that asked for comment on the suit.

The university stated it is “unable to comment on the specifics of litigation” in a May 9 email to The College Fix. “We will say without equivocation, however, that we take seriously our obligation to accurately report data and other information to ranking and reporting agencies.”

“We are confident in our process and procedures to accurately report to rankings publications,” Rutgers stated in its email. “The Rutgers Business School team follows the guidelines set by the standards agencies, maintains control over our statistics and methodically reports the information.”

The Fix asked U.S. News & World Report for comment on the lawsuit and for information on the process for employment verification, but the publication denied to comment. Madeline Smanik, a communications manager for the publication, said it would not comment on “ongoing legal matters.”

The alleged employment scheme “was a blatant effort to give the impression of a higher overall full-time employability rating with third-parties and to deceptively bolster Defendant Rutgers’s ‘ranking’ with crucial media outlets, such [as] U.S. News & World Report,” the lawsuit alleged. 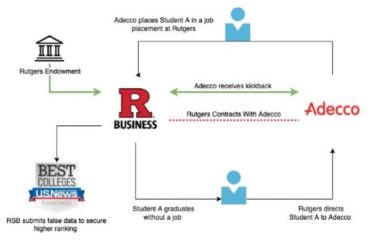 The College Fix emailed the press team for Adecco Services, the temp agency named in the lawsuit, on May 9, but the inquiry bounced.

The Fix reached out through email and Facebook to the company’s social media team to ask it to forward the inquiry about the allegations, but no response has been received.

University allegedly retaliated against the whistleblower

White alleged that once she sounded the whistle, she was not taken seriously, but instead “further ostracized from her department” as a form of retaliation.

The lawsuit stated that when White “became aware of, and blew-the-whistle on, Defendants’ scheme to falsify and manipulate postgraduation employment data,” the university “did not investigate and remediate the fraud.”

Instead, university officials “subjected [White] to a hostile work environment, disparate treatment, and retaliation because of both her complaints concerning Defendants’ illegal conduct and her disability.”

White has an autoimmune disorder, but the university did not provide her with accommodations. University officials instead “were extremely hostile and did everything in their power to make Plaintiff’s job extraordinary difficult.”

White has asked the judge to order Rutgers to pay damages, back and front pay, benefits and have the defendants undergo mandatory harassment, bias and retaliation training.

Rankings manipulation is a common problem

White’s attorneys compiled other examples of universities that have admitted to rankings inflation.

The examples included Tulane University admitting to “sending U.S. News inaccurate information about the number of applicants and test scores of applicants to its business school.”

“Bucknell University [also] admitted that it had misreported SAT averages from 2006 through 2012, and ACT averages during some of those years” and “Emory University admitted to knowingly misreporting [test, class rank and grade point average data.”