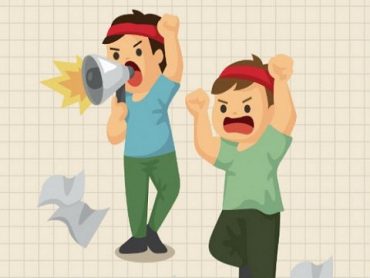 San Diego State University activists surrounded college president Elliot Hirshman on Wednesday for over two hours, preventing him from leaving the campus, all in protest of his “inadequate” response to numerous anti-BDS — Boycott, Divest and Sanction — posters which were hung around campus.

The posters were created by the David Horowitz Freedom Center and “identified by name a number of prominent students and faculty BDS activists on the campus and described them as having ‘allied themselves with Palestinian terrorists to perpetrate BDS and Jew Hatred on this campus.’”

[…] we recognize and fully support the rights of all parties to voice their positions on political issues, whether supportive or critical. We also understand that when parties adopt a specific political position they become responsible for their actions and these actions may produce criticism. This was not sufficient for those offended.

After sitting in silent protest during the swearing-in ceremony, the demonstrators surrounded Hirshman’s vehicle — a police car — and prohibited his departure.

“Hirshman, Hirshman, come on out! We have something to talk about!” the activists chanted as the president sat in the car, and placards held by those on hand read “We Demand An Apology,” “Respect My Name,” and a large banner featured the slogan “SDSU THINKS WE ARE TERRORISTS.”

“My friends are not terrorist [sic], and if their names are being posted around campus that’s an issue of security,” said student Jeanette Corona. “No student should be demonized. … It’s (Hirshman’s) job to ensure the safety of all students on this campus.” Hassan Abdinur, a Students for Justice in Palestine (SJP) and Muslim Students Association (MSA) activist, said “Things have been building up and building up and the university hasn’t done anything so this was our opportunity to kind of stand face-to-face, really close …” adding that he got so close to President Hirshman that he actually “smelled his breath.”

At least he didn’t complain that Hirshman was “smelly.”

Student Osama Alkhawaja said to Hirshman that “The only thing that will get these students to leave is a public admission that you’re sorry for the way that you’ve treated them.”

And that’s what Hirshman did, eventually.

“If we have done things inadvertently that have upset or hurt people, we are sorry for that,” he said, in a sort-of apology.

Students began to disperse, but not everyone was satisfied.

“[We wanted] an apology to the entire student body for his disrespect and disregard for the student voice [and] opinion,” Mustafa Alemi said.

“Without our tuition money he’s not living the life he has right now and the fact that it took two to three hundred students to block his car to have a conversation with us is incredibly disrespectful.”

Of note, the Horowitz posters, according to FrontPage Magazine’s Sara Dogan, do not call campus SJP and MSA members “terrorists.”

“They merely declare that they support anti-Israel terrorists and parrot their propaganda.”

“Hillel is committed to creating a campus climate where all feel safe and secure, where diversity is celebrated, and where political differences are communicated civilly and respectfully,” it said in a statement.

Responding to the controversy over the naming of students on the flyers, in an email to The College Fix David Horowitz said

They’re not ignorant college kids. They’re willing and committed campus agents of Hamas. Big difference. We singled out the leaders of an organization founded by members of the Muslim Brotherhood whose sole mission so to spread Hamas’ genocidal lies about the Jewish state and spearhead the Hamas-inspired and Hamas-funded BDS campaign which is a genocidal campaign to strangle the Jewish state. Calling them innocent would be a insult to their intelligence and malice.

If you do think Horowitz’s tactics are somewhat harsh, take a look at but one of the results of his stick-to-itness (be sure to watch until the very end):

You heard that right. When Horowitz says “I’m a Jew. The head of Hezbollah has said that he hopes that ‘we will gather in Israel’ so he doesn’t have to hunt us [Jews] down globally. FOR IT OR AGAINST IT?” the student answers … “For it.”

How would CAIR — the Council on American-Islamic Relations — answer Horowitz despite its statements at the Hirshman protest?

There’s likely to be more protests next week as Horowitz is scheduled to speak at the school on Thursday. His invitation was made before distribution of the posters.

RELATED: UNC doubles down on the #NotSafeUNC stupid