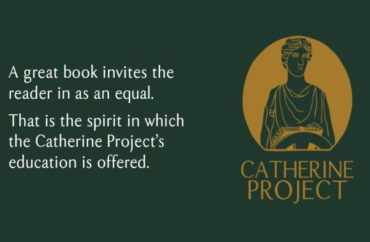 During the summer of 2020, amid pandemic-driven nationwide lockdowns and school closures, Zena Hitz had an idea.

What if the classical liberal arts could be taught to students without the byzantine academic bureaucracy, sky-high cost barriers to entry, and suffocating red tape of the U.S. higher education system?

Hitz, author of “Lost in Thought: The Hidden Pleasures of an Intellectual Life,” began to put together a classical humanities curriculum free of what she calls the “distorting” burdens of grades, tuition, fees, degree requirements and administrators.

She named her new program the Catherine Project after the early 4th century martyr St. Catherine of Alexandria, who was tortured and executed by order of the Roman emperor after his best pagan academics were unable to refute her skilled oratorical defense of Christianity.

Since September 2020, the Catherine Project has served more than 250 different students, along with 70 additional students who participated in a fall 2020 seminar on the Book of Genesis.

This fall, the project has enrolled 138 participants across 20 different tutorials and reading groups. Subjects taught range from seminars on classic works of philosophy and literature, such as St. Augustine’s Confessions, Dante’s Divine Comedy and Homer’s Iliad, to classes on Latin, Ancient Greek and Biblical Hebrew.

In an interview with The College Fix, Hitz said that a classical education is “indispensable” to promote “the flourishing of individuals” and to build a society of “roughly equal stakeholders.”

“Through liberal education, we learn about the modes of human flourishing and the limitations that face it,” she said. “We are then empowered to devise forms of work and other activities that build that flourishing.”

It’s different from education for job training, she said, which is just an education that “suits the needs of ultra-rich employers” and trains people to be “cogs in a machine that gives someone else money and power.”

Founding the Catherine Project was an attempt to keep the humanities alive, according to Hitz.

With the liberal arts “nearly extinct” on college campuses nationwide, and administrators at institutions where such a curriculum has been preserved under increasing pressure to water it down or whitewash it, Hitz said that it is “crucially important” that a traditional, student-centered and non-commercialized program of study be available.

“Nothing sucks the life out of Shakespeare, Plato, or Euclid than a huge auditorium,” she said. “We want to read and talk about these things, and we need personal mentoring so that our talk isn’t just empty, but really gets us somewhere. Enrollments are plunging in English, history and philosophy, because they are taught in a boring watered-down way for a massive classroom.”

Scott Samuelson, a philosophy professor at Kirkwood Community College in Iowa City, Iowa, and one of the Catherine Project’s instructors, described in detail the organization’s pedagogy in a recent op-ed.

Seminars are taught as Oxford-style tutorials, meeting weekly for two hours over the course of a 12-week semester. Participants complete reflection papers on the week’s assigned readings, which frame the content of each week’s classroom discussion, while also having the opportunity to take part in peer-led reading groups outside of class.

Acknowledging that the concept of a Western classical education “triggers certain academic types,” he asserted that the Catherine Project has “no agenda to indoctrinate people in any particular set of social or political values” and seeks only to make classical philosophical ideas and the great books accessible to everyone, regardless of background.

“We choose great books not to keep anyone out but to let everyone in,” wrote Samuelson.

The Catherine Project has filed for tax-exempt charitable status with the Internal Revenue Service.

“We rely on donations from readers and benefactors,” Samuelson said. “We intend never to charge tuition.”

Hitz echoed this, noting that since the Catherine Project “runs only on philanthropy,” it’s able to keep class sizes small and avoid adopting the profit-driven business models that are “wreaking havoc on education everywhere else.”

“Education has to be kept out of the market, supported directly by either the government or philanthropy,” she said. “How have we lost touch with these obvious truths?”