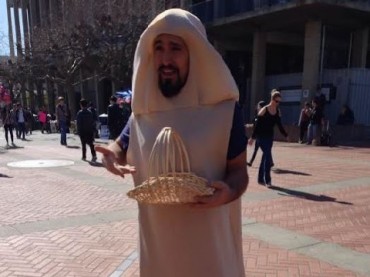 Hundreds of elementary and middle school students who recently toured UC Berkeley got an early lesson in sex education when they witnessed a guy in a giant penis costume walking around handing out condoms, as well as a variety of condom-inspired games, an undergrad at the university told The College Fix on Wednesday.

The schoolchildren were on campus last week at the same time that the public university hosted National Condom Week observances that, in addition to the giant penis, included an assortment of sex-themed activities such as a vagina-anus condom toss, a vulva and anus “pin the tail,” and a condom water-balloon game. “There were kids walking by and looking and being confused,” UC Berkeley student Claire Chiara, who witnessed the situation, said in an interview with The College Fix. “It’s just really inappropriate.”

It’s not unusual for elementary and middle school students to tour the campus – it happens all the time. But on Thursday, things really came to a climax, because the young schoolchildren visiting the university were actually hanging out and playing games on the same quad area where the condom events took place, Chiara said.

“There were hundreds of middle school and elementary schoolchildren doing tours and activities on the lawn,” Chiara said. “They were told explicitly, ‘You can’t give condoms to a 10-year-old.’ We had little lines of children walking down Sproul (Plaza) next to all the demonstrations, the guy in the penis suit, everything.”

“Why on Earth would they plan this on the same day we have demonstrations on how to use dental dams?” What’s more, all this took place under the nose of UC President Janet Napolitano, who was at UC Berkeley on Thursday for a campus visit of her own.

According to the National Condom Week agenda at UC Berkeley, “Hot-DAMn Monday” offered a look at “commercial and do-it-yourself barrier methods such as dental dams, gloves, and finger cots. What barrier method would be complete without its best-friend lube? This day will also look at different types of lube and how each may enhance your next sexual experience.”

On “Insert-It Tuesday,” students were taught how to “properly use insertive condoms in a vagina or anus.”

On “Wear-One Wednesday,” the events focused on “traditional condoms commonly worn on a penis, toy or phallus.”

“Fun activities include traditional condom demos, creating your own condom lollipops, and testing the durability of traditional condoms by filling them with water and tossing them at a consenting opponent. You like how smooth I worked consent in, don’t you?” the agenda stated.

And on “All-of-the-above Thursday” – the day in which Napolitano and school schildren were on hand – the events included a little bit of everything: “Will combine all of the safer and sex information and activities and bring them to you on (one) exhilarating day! If you missed a day, or an activity, or loved something so much you want more this day is for you!”