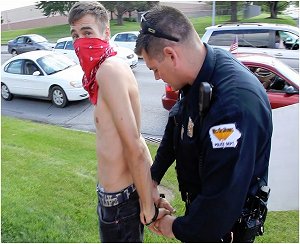 According to the Federal Bureau of Investigation, police have made about a quarter billion arrests in the last 20 years as tactics change to focus on a zero-tolerance policy toward small crimes. Almost one out of three Americans have a file in the FBI’s master criminal database.

These arrests are now starting at the school level. Parents and school officials, concerned by increased drug use and school shootings have caused a greater level of police presence on school grounds, allowing school administrators to now refer minor crimes to the police, turning from traditional school discipline methods of detention into a smaller version of an adult criminal-justice system.

Judith Browne Dianis, executive director of the Advancement Project, says that, for example, “Talking back to the teacher can now be called disorderly conduct, and a fight may end with assault and battery charges.”

After some twenty-five years in education, I’ve yet to see or hear of a student who talked back to a teacher charged (via the police) with disorderly conduct. The only way such should happen is if the talking back involves a refusal to leave the classroom, and/or explicit threats of violence towards the teacher or other students.

And, why shouldn’t someone who starts a fight (possibly) be charged with assault and battery? Especially if the victim of the assault is injured?

Welcome to the real world.

To be sure, we’ve all heard of the anecdotes of school officials going way too far in disciplinary matters, ridiculously so in some cases. Unfortunately, we’ll never be able to sort out the moronic school administrators from the sensible ones until such instances come to public attention.

But the problem with what folks like Ms. Dianis want is that it now has federal government backing.

As reported here at The College Fix, the federal Education Department’s Office for Civil Rights wants proportionate representation when it comes to discipline figures. In other words, racial stats need to be “balanced” in discipline matters, no matter who is actually committing the offenses. (See this post by Joanne Jacobs, as well.)

In addition, the OCR wants “a positive school climate that does not rely on methods that result in disparate use of disciplinary tools.” Translation: Don’t actually discipline disruptive students.

Here’s a perfect example of that “non-use of disciplinary tools” by one explicitly charged with keeping our kids safe. Philadelphia School District Assistant Superintendent of Alternative Education Benjamin Wright, contends, among other things:

“Best” of all, regarding a pregnant teacher who was attacked by a student, Wright astonishingly remarked that “pregnant teachers should know how to protect themselves”: “If I’m in a school, and I’m a teacher, and I’m pregnant, make sure I don’t put myself in harm’s way, because the kids are going to be kids.”

Would you want your children in a school led by Mr. Wright?

Former Education Department attorney Hans Bader has noted that such short-sighted federal measures will exacerbate not only racial segregation in the public schools, but the academic achievement gap as well. Families which are able will flee the public schools, leaving families without the means to do so — and who care about education — to suffer the consequences of the chaos effected by our own government.