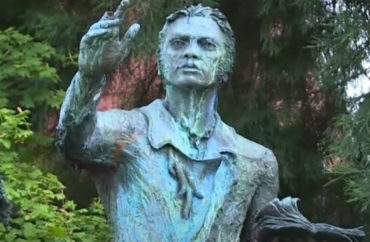 Several statues at college campuses in Oregon have been vandalized or removed as demonstrators allege that they promote a history of colonization and white supremacy.

The University of Portland and University of Oregon dealt with the recent controversies, joining protests across the nation targeting historic statues accused of honoring racism.

Protesters toppled two pioneer statues at the University of Oregon on June 13, according to The Oregonian.

The two statues torn down at the University of Oregon were called “Pioneer” and “Pioneer Mother” and depicted white pioneers.

BREAKING: The controversial Pioneer Father and Pioneer Mother statues on the University Oregon were toppled over by activists Saturday evening. The Pioneer Father was then dragged to Johnson Hall. @APNELSONPHOTOS @danamsparks @registerguard @uoregon https://t.co/qEmmmn6MeA

The Pioneer Mother was also toppled. The statue’s letters and plaques were partially removed. One is missing. pic.twitter.com/k8RJYufhjD

“The Pioneer and Pioneer Woman statues have sparked controversy on the University of Oregon campus. Last year, red paint was sprayed on the Pioneer’s whip and crotch to protest the statue’s colonial history. Members of the Native American Student Union said shortly after the incident that the statue makes many students feel unwelcome on campus,” reports the Daily Emerald campus newspaper.

In response to tearing down these statues, the University of Oregon released the following statement: “These are obviously turbulent times. While we support peaceful protest and vigorous expression of ideas, we do not condone acts of vandalism.”

It added that officials plan to put the statues in storage until a committee decided what to do with them permanently.

“Decisions about the future of the Pioneer statues and other monuments should be made by the campus community through an inclusive and deliberative process, not a unilateral act of destruction,” according to the university’s statement.

Soon after, the University of Portland rushed to remove a monument from its campus after it was identified in a list of problematic monuments circulating over social media among activists, the Oregonian reports.

The University of Portland removed in mid-June a large monument that consists of three statues of William Clark, York, who was Clark’s slave, and an unidentified indigenous guide.

A statue of York, a slave brought along with explorers Lewis and Clark, was removed from the University of Portland Wednesday, with the other figures in the same sculpture removed on Thursday: https://t.co/NVqExrILMH pic.twitter.com/TuS0H6N8E4

The statues were intended to “stand as a visual reminder that three races contributed to the success of the Lewis and Clark expedition — symbolic of the first integrated society in Oregon country,” according to a sign on the monument.

But protestors linked those statues to celebrations of white expansion into indigenous lands. The preemptive takedown of the monument was intended to protect it from possible vandalism after it was targeted by activists, University of Portland spokesperson Michael Lewellen told the Oregonian.