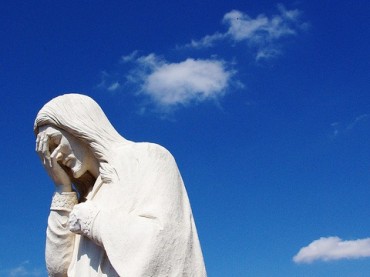 Liberty Counsel, a conservative public interest law firm, has filed a demand letter with Polk State College over a humanities class at the public institution that is reportedly so shockingly anti-Christian, you’ll have to pick your jaw up off the floor after you read about it. No, seriously.

The law firm represents a 16-year-old honors student who is dual enrolled in high school and the Florida college. Its attorneys allege the student received a bunch of Fs on assignments because she refused to go along with the professor’s severe and proactive anti-Christian views.

The counsel demands an apology for the student, as well as assurances that future humanities courses taught by Professor Lance “L.J.” Russum are “free from such unlawful discrimination.”

Here’s the details on Russum’s spring 2015 “Introduction to Humanities” course, detailed in the demand letter. Brace yourselves:

Beginning in Week 1 of the course assignments, Mr. Russum makes a claim of secular humanist orthodoxy: “What we take to be the ‘truth’ is just the retelling of the myths of early civilization. The god [sic] of Christianity/Islam/Judaism are [sic] a mixture of the god(s) myths of the Mesopotamians.” He continues: “The point of this is not to ‘bash’ any religion, we should NEVER favor one over another, they all come from the same source, HUMAN IMAGINATION . . . ”. In other words, all religions are equally “false” and must be treated accordingly. Also in Week 1, Mr. Russum introduces students to “Karl Marx” as an authority on the “the cultural attempt to build civilization” of the ancient Mesopotamians.

In Week 2, Mr. Russum introduces students to “the Epic,” including “elements of homoerotic/Friendship/Raw human sexuality” and “the use of sexuality and the role of women” in the epic.

Weeks 3 and 4 discuss the Egyptians, and Mr. Russum’s attempt to deconstruct the Bible by claiming the discredited position that the Egyptian Book of the Dead is the source material for the Biblical First Book of Samuel. …

With Week 11, however, Mr. Russum returns to his theme of Christianity as the source of all evil in “The Roll [sic] of Religion in the Middle Ages.” Throughout Week 11, and the course content, Mr. Russum repetitively refers to Christianity with pejoratives such as the “Christian mythos;” or the “mythology of the trinity [sic], god [sic], Christology and Mariology;” “the mythos that seeks to punish unbelief;” “one of the most violent forms of religion the world has ever seen;” and so on. …

“Luther is a product of his historical moment and must be understood in his time. Describe how his reformation is a political act [sic] one that expands humanism and draws us aways [sic] from the mythos that seeks to punish unbelief. Luther free [sic] us through his humanism and we can never forget the power of his reformation.” “Any quotes from his sermons or writings MUST be about humanism and how the reformation is in the right place and right time in history NOT some divine providence of the gods.” “the history of the humanism of Luther and his reformation.” “IF You turn this into a theological debate or [sic] divine providence I will NOT read it and you will be given a zero.”

In addition … Mr. Russum assaults the sensibilities of his students by focusing Page 2 of his PowerPoint on an enlarged, zoomed-in, head-on picture of the penis of Michelangelo’s David. Note that the textbook provides a full-body shot of the same sculpture, but it is not zoomed in on the genitals, front and center.

On Page 13 of the Week 14 PowerPoint, Mr. Russum notes in the upper right “coroner” [sic] of Michelangelo’s painting The Last Judgment, a Greek column held by angels. Donald Painter Polk State College Page 4 According to Mr. Russum, here “we have a Phallic [sic] symbol with the back of the angel serving as the testicles,” depicting heaven “as a Patriarchal place.” Continuing on Page 14: “Just below the Phallic [sic] symbol you have this wonderful scene in heaven where you have men kissing each other in a very erotic embrace.” Mr. Russum then uses Michelangelo as an ideological sock-puppet stand-in for his own beliefs about homosexuality, stating that “in the 16th century Michelangelo is claiming that being in a same sex relationship is NOT A SIN and WILL NOT keep someone out of Heaven.” (Emphasis added.) Clearly, Mr. Russum has an axe to grind, and strays into his own theological views on homosexuality and heaven, under the guise of art appreciation.

In this academic environment, Mr. Russum demanded essay answers from G.L. and the other students which conform to his own personal worldview. Where G.L. endeavored to provide academically responsive answers in a manner that did not simply concede that Christianity was false, violent, or oppressive to women; that Martin Luther’s motivations for the Reformation were not wholly secular in nature; and that there are other interpretations of Michalengelo’s sculptures and paintings, Mr. Russum “graded” her papers with four straight zeros. G.L.’s papers are attached for your reference. They include verbatim quotes of Mr. Russum’s biased, inappropriate, and historically incorrect questions.

You can read the full letter here. It’s 10 pages long, and also goes into Russum’s personal interests to show his biases cannot be written off as “legitimate pedagogical purposes,” according to Liberty Counsel:

The following are direct quotes which Mr. Russum has personally “Liked” on his Facebook page, which read as almost a parody: “A Foul-Mouthed Feminist – F*ck the Patriarchy;” “End Colonial Mentality – How the Hetero Capitalist Able-Bodied White Patriarchy Ruined the World;” “Atheist Nurse;” “Online University of the Left;” “Sh*t Academics Say;” “Marx Engels Lenin Institute;” “Slavoj Zizek” (a modern-day Communist philosopher and supporter of mass murder); “Transgender Law Center;” “I f*cking love science;” “We F*cking Love Atheism;” “Unpacking the ‘F’ Word;” “Comrades of the World;” “B*tch Media;” “The Vaping Atheist;” “Intelligent, classy, well-educated women who say F*ck a lot;” “Feminist Ever After;” “Redstockings of the Women’s Liberation Movement;” “Third Wave Feminism;” “Guerilla Feminism;” “Women Without Religion;” “Militant Atheism for the Soul;” “The Atheist Cookbook;” “Anarcho-Communism;” “Nonsense from the Bible;” “You Too are Feminist;” “The Left Side of Feminism;” “Smashing the Patriarchy;” “Rabid Feminist;” “Radical Feminists;” “I Acknowledge The Destructive Nature of Capitalism;” “I Acknowledge Class Warfare Exists;” “International Socialist Review;” “Transformative Justice Journal;” and last but not least, “Karl Marx, Politician.” He is a member of the Facebook groups “Zizek Studies” and the “Polk State College Gay/Straight Alliance.”

The College Fix has covered a lot of biased professors in its time. Russum appears among the best of the best.

World Net Daily, which first reported on the demand letter, left messages for Russum as well as school Dean Donald Painter, but a college spokeswoman told the news outlet the college would not comment.