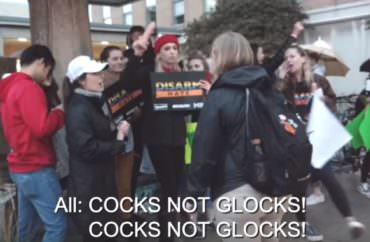 The video is telling in that it serves as a prime and explicit example of how the left cannot seem to process or debate logical facts. In this video, taken at the University of Wisconsin Madison, a group of mostly young women appear blind to reason and caught in some sort of fervor that keeps them from processing rational thought and intellectual arguments.

The “Cocks not Glocks” group was protesting a speech by conservative commentator Katie Pavlich, who argues one of the best ways to defend against the threat of rape is by allowing women access to their Second Amendment right to carry a firearm.

The video shows an apparent female student telling the group of dildo-waving women that her friend was raped on campus, and if she had had the right to carry that might not have happened.

“I’m not,” the woman replied. “You guys are insulting survivors by not allowing them to defend themselves. I have a friend who was raped on campus. She wasn’t allowed to have her concealed carry with her, and she was raped because of that. If she would have had her concealed carry, I guarantee she wouldn’t have been raped.”

Near silence descended on the crowd at that point. It was almost as if, for a brief moment, neurons in their brains were starting to fire, and they were actually going to attempt to process what she had said and maybe even start a rational, dispassionate discussion.

That hope was dashed when the lead protester responded with a shrill cry of: “Show me what democracy looks like!”

You can see the young female student who had explained her position try to continue to make her point as the group continues their blind mantra, her words drowned out by their repeated chants.

The activists with Cocks Not Glocks at UW Madison had scheduled “The Bonerfide Penis Arts Fest” to compete with and demonstrate against the Young Americans for Freedom’s Oct. 10 event titled “Trigger Warning: Second Amendment Rights and Self Defense.”