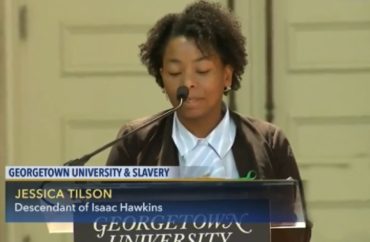 A year after the Jesuit university announced the reparation fund, descendants of slaves owned by Georgetown have questions

Descendants of slaves owned by the Jesuit religious order and Georgetown University have questions about where the money raised for reparations has gone.

The Catholic university first announced in April 2021 the plans to raise $1 billion to make reparations, though not individual payments, to atone for the Jesuits’ past ownership and sale of slaves. The Jesuits had a goal to raise $100 million in the short-term, according to the initial announcement.

A year later, the descendants of some of the 272 slaves want to know how the money has been spent.

“NOBODY( Georgetown /SOJ/ The Descendant Truth and Reconciliation) TALKS TO US,” Jessica Tilson (pictured) told The College Fix via email. She listed several slaves she has ancestral roots to – “Hawkins, Hill, Blacklock, Winberry, Scott, Diggs, and Butler.”

“The Descendant Truth and Reconciliation ( 5 descendants on the board) foundation received millions dollars without applying for a grant,” Tilson told The Fix. “But Georgetown University/ Jesuits want 5000 descendants fighting over the $400,000.00 grant…That’s $80.00 a piece for us the throw aways.”

She works with a group of slave descendants in Louisiana who say they have been left out of the discussions on how the money would be spent.

She said the community in Louisiana of slave descendants has “zero clue” where the money has gone. Communication with the university and the foundation that administers the grants has been nonexistent.

“Can the descendant community be invited to one of the Zoom call or something ? Can we get a message in bottle?” Tilson told The Fix. “Can we get a smoke signal? Can someone send us a homing pigeon message ? Can we get a sky writer? How about Morse code ? Text messages ? Email ? SnapChat? Instagram? Twitter? TikTok?”

The silence from Georgetown University is nothing new, according to a campus group formed to support the descendants of slaves.

The GU272 advocacy team held an event in December titled, “Georgetown F*cking Lied” to continue to address its concerns with the lack of accountability and transparency from the foundation tasked with funds distribution..

“Media was portraying GT and acting like they were the best university ever and they were doing such a good deed when in reality to this day they’ve given zero dollars and zero cents to this fund,” a presenter at the meeting said. “The only group that has gotten anything from this fund is GT for the good publicity that they have done.”

According to representative Olivia Henry, HASA has not officially delivered their letter of petition to Georgetown, but they know Georgetown is aware of their concerns.

“We have a timeline in place to make our petition and appeal to Georgetown’s administration the most effective,” Henry told The College Fix via email on May 16.

Henry also said that HASA has “been working alongside Georgetown’s administration on the Truth and Reconciliation working group since its inception in 2019.”

HASA wants a mixture of people to be involved with the distribution of the $1 billion fund.

The distribution should be a “collaborative effort between descendants and Georgetown’s administration, with students playing a supporting advocacy role in the process,” Henry stated.

“We have no interest in having solely students wave the gavel on plans descendants have crafted,” Henry told The Fix.

The money must be “transparently distributed, with the distribution process being accessible to all.”