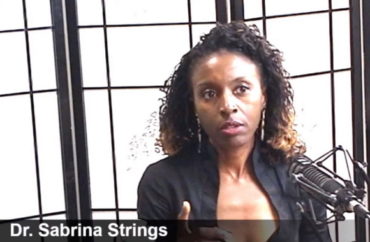 Professor also argues that the body-mass index is racist

A professor who regularly writes about race and health issues recently argued that the stigma surrounding obesity is linked to racism.

Sabrina Strings, a professor of sociology at the University of California, Irvine told CBS News that the medical community’s approach to weight issues stems from anti-blackness and oppression.

She told CBS News on August 20:

We cannot deny the fact that fat-phobia is rooted in anti-Blackness. That’s simply an historical reality. Today, when people talk about it, they often claim that they don’t intend to be anti-Black … they don’t intend all of these negative associations, and yet they exist already, so whenever people start trafficking in fat-phobia, they are inherently picking up on these historical forms of oppression.

The interview came ahead of a CBS News special airing this Sunday but available on Youtube called “Fat Shaming.”

Strings explained that this is not a new a phenomenon, but goes back to the slave trade:

With the dawn of the slave trade, skin color was the original sorting mechanism to determine who was slave and who was free. But as you might imagine, with slavery progressing through the century, skin color became a less reliable source of sorting various populations. Therefore, they decided to re-articulate racial categories, adding new characteristics, and one of the things that the colonists believed was that Black people were inherently more sensuous, that people love sex and they love food, and so the idea was that Black people had more venereal diseases, and that Black people were inherently obese, because they lack self-control. And of course, self-control and rationality, after the Enlightenment, were characteristics that were deemed integral to Whiteness.

Strings said that white Protestants tried to show they were “morally upright and racially proper” by eating responsibly and staying fit.

The professor argued that Protestants believed “if you did not show temperance, that was evidence that you were one of the savages, and also, that you were un-Christian.”

The idea of obesity issues and weight management being tied to racism is not a new topic for Strings.

In July, she told the Huffington Post that the body-mass index is “racist.”

“It is racist, and also sexist, to use mostly white men within your study population and then try to extrapolate that and create norms and expectations for women and people of color,” Strings said.

She also wrote in the New York Times in a May editorial that black people are sick because of … slavery.

“The era of slavery was when white Americans determined that black Americans needed only the bare necessities, not enough to keep them optimally safe and healthy,” Strings wrote.

“It set in motion black people’s diminished access to healthy foods, safe working conditions, medical treatment and a host of other social inequities that negatively impact health,” she said.

Strings released a book in May 2019 titled “Fearing the Black Body: The Racial Origins of Fat-Phobia.”