Some professors and activists argue 2+2 can sometimes equal 5, a controversial claim recently brought to light in a series of tweets that has sparked a robust debate among education watchdogs and others.

The Twitter account Wokal Distance on Aug. 3 highlighted several screenshots amassed on the subject, noting: “This is a screenshot of people saying 2+2=5 … Among them are teachers, educators, and professors who plan on teaching this stuff to your children. So let’s talk about what’s going on here, why they’re doing this, and how we can stop it.”

Among them are teachers, educators, and professors who plan on teaching this stuff to your children. So let's talk about what's going on here, why they're doing this, and how we can stop it.

In a message to The College Fix, the person running the Wokal Distance account declined to provide their identity or weigh in further on their thread, saying they would like their Twitter feed and profile to speak for itself.

But the account clarifies that what the scholars are arguing is not that 2+2 does not equal 4, but rather “2+2 can sometimes equal 5.”

The fundamental basis of the argument is that there is no universal answer to the math problem 2+2 that is true in all cases; they are not falsifying 2+2=4, they are deconstructing it, Wokal Distance argues. 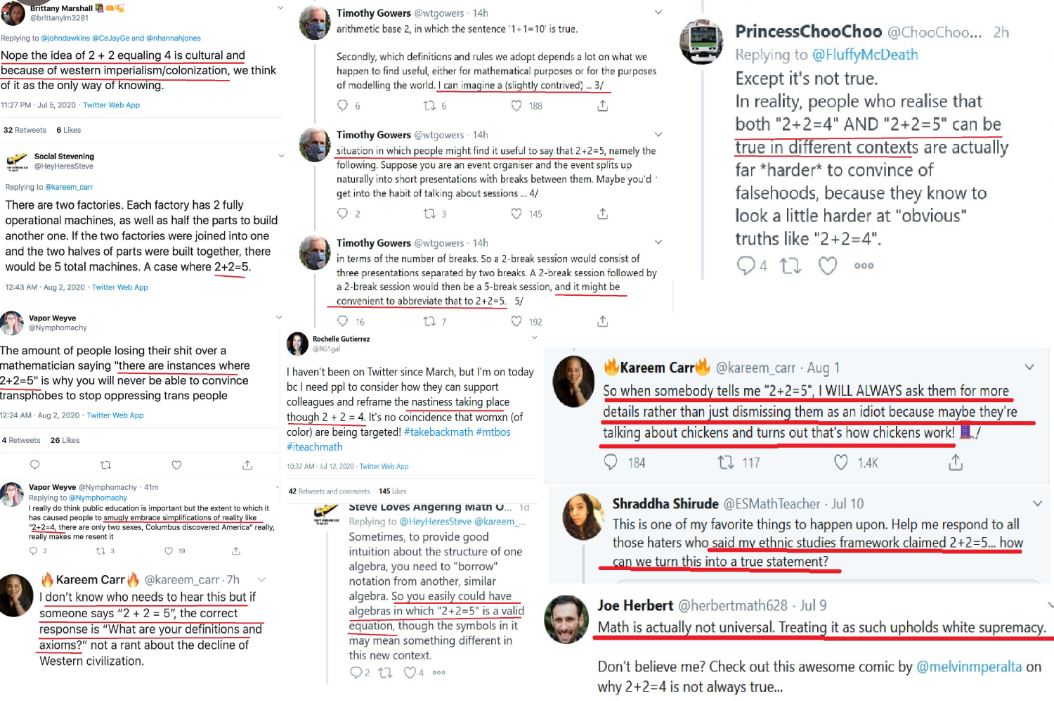 The Wokal Distance account goes on to explain that this deconstruction is effectively a destabilization of meaning.

Under this so-called woke math, “2+2=5” because when a meaning is not fixed, lucid, and defined, that meaning can be redefined and warped. With this distortion, people can supposedly jump to any conclusion they desire.

This is an attempt to reorder how we decide what's true and what's morally right, and it depends upon people like you believing it must somehow be more reasonable than it sounds because it comes from caring, smart people.

Want to know what's going on with the "2+2=5 discourse"? It's this. I can't believe it took 8400 words to explain something so ridiculous, but that's what happens when Critical Social Justice starts mucking around with stable and important truths.https://t.co/yfCzNeKl7U

Wokal Distance cites a couple of examples of actual pieces of academia that aim to legitimize such an argument, including D.S.L. Jarvis’ book “International Relations and the Challenge of Postmodernism: Defending the Discipline” and Marta Calás and Linda Smircich’s article “Past Postmodernism? Reflections and Tentative Directions.”

One of the more contentious conclusions Wokal Distance discusses is that under this theory, “objectivity and any either/or binary about truth (answers are either true or false) are part of white supremacy.”

The account isolates and examines the thoughts of one professor in particular, University of Illinois at Urbana-Champaign’s Rochelle Gutiérrez.

Gutiérrez has stated she believes that “math has been controlled by global white supremacy. So every area of mathematics might come to the conclusions it does because of white supremacy.”

Wokal Distance contextualizes Gutierrez’s statement by looking into some of her other timely thoughts and statements.

Her faculty bio states that she builds upon Indigenous principles and has argued for a new form of mathematics in which humans are no longer centered, called mathematx.

For even more context, Wokal Distance inspects a statement Gutierrez makes in an academic paper that her “goal is not to get closer to some absolute truth about our world.”

Gutiérrez did not respond to a request from The College Fix seeking comment.

(The College Fix has covered her theories before: “Professor proposes ‘mathematx’ to fix pro-human bias in math” and “Math prof who argues against ‘truths and knowledge’ to host Carleton College convocation.”)

One scholar who has weighed in on the debate is University of Chicago historian Rachel Fulton Brown, who posted on her Facebook page in response to the discussion that “2+2=4.”

Asked to weigh in, she told The College Fix that what’s at stake “is our ability to think rationally about anything.”

“If universals do not exist, but are only names we give individual things, then there is nothing to stop us from naming individuals however we like, which is how we end up with the irrational claim that unborn babies—or people of a different skin color or race—are not human,” Professor Brown told The Fix.

“If 2+2 does not equal 4, then murdering babies in the womb is no more or less evil than murdering six million Jews in the Holocaust because there is no justice by which to condemn their murder.”

Editor’s note: The article has been updated to include a comment from Wokal Distance.