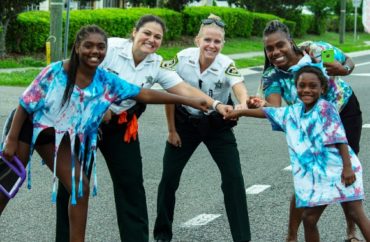 Public school officials in Chicago will let each campus decide if it will keep school resource officers for the fall.

But at least some majority black schools have indicated they want the cops in the building, with one council being accused of “upholding white supremacy.”

Ahead of the discussions and votes that will likely take place throughout the coming months, Chicago Public School students rallied to demand that the police be removed from the schools. CPS board members are appointed by the mayor, but schools have councils that can make some decisions.

One student from Kenwood Academy, on the city’s South Side, said her school council’s decision to keep SROs last year “enforces trauma on students and conditions us to be criminalized.”

“The decision was not made on any basis besides adultism and internalized racism,” Judai Smith said, according to DePaul University’s paper, The DePaulia. “The decision really emphasised [sic] for me how this current educational system does not serve the wellbeing of youth but to uphold white supremacy.”

The College Fix could not locate contact information for Smith and The DePaulia did not respond to a request for her information.

The entire council appears to be black and 83 percent of the students are “Afro-American” according to the demographics page for the school.

The College Fix reached out to council members Montel Gayles and Ramona Burress several times through email to ask about their response to the accusation and if they planned again to keep the Chicago Police Department members in the school.

The Fix did not receive a reply to the multiple emails sent in the past six weeks.

One school will keep cops but work on community engagement

Lindblom Math and Science Academy, which is located six miles away from Kenwood on the city’s southwest side, also voted to keep the cops in the buildings.

While the council has not released all the details, “the broad strokes idea is to keep the officers while also introducing restorative-justice concepts from the framework, along with a plan to better engage the neighborhood,” Chalkbeat reported.

The College Fix reached out to Paul Vallas, the former CEO of Chicago Public Schools, through Twitter on May 14 and Facebook on June 16 to ask about the role of school resource officers. The Fix also asked about the pros and cons of having cops in the schools. Vallas acknowledged receiving the Facebook message but has not provided any further response.

Vallas also worked as the superintendent of schools in Bridgeport, Connecticut and as the CEO of the Recovery School District of Louisiana and ran as a Democrat for the lieutenant governor of Illinois in 2014 and for Mayor of Chicago in 2019.

Chicago is not the only place where majority-black schools have shown support for SROs.

“The Prince George’s County Board of Education in Maryland voted in March to keep its 33 school resource officers,” The Washington Times reported.

The Prince George’s County Public Schools is 55 percent black and 36 percent Hispanic, according to its website.