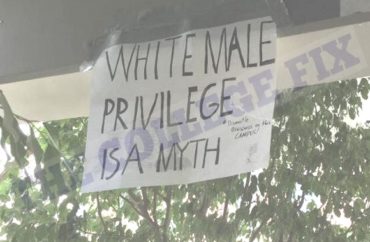 Someone hung a “White Male Privilege Is A Myth” poster next to the “Dismantle Whiteness” art exhibit recently installed at the University of Southern California.

Guess which one is still up? If you said “Dismantle Whiteness,” you are correct.

The recently installed “DISMANTLE WHITENESS AND MISOGYNY ON THIS CAMPUS” ceiling message is one part of a larger art display at an entrance to the Annenberg School for Communication and Journalism building. The piece also includes large sketch drawings of four women of color on walls flanking the doorway.

The mural was designed by the feminist artist collective When Women Disrupt in conjunction with students in the class “Women: Designing Media for Social Change.” 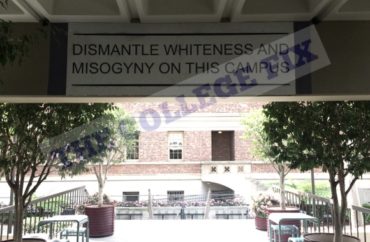 “The installation is intended to spark dialogue,” communications Professor Alison Trope has said in a statement to The College Fix about the exhibit.

Yet, when someone else wanted to spark some dialogue with a counter-protest exhibit of sorts, that was quickly removed.

The hand-made poster stating “White Male Privilege Is A Myth … Dismantle divisiveness on this campus!” was taken down after it was spotted by a professor, USC Annenberg Media reports.

“A poster put up in response to the art installation said ‘White Male Privilege Is A Myth.’ At 9:08 on Monday morning an Annenberg professor saw the poster and took a photo. It was taken down shortly thereafter. She said that it wasn’t there Friday when she left,” student journalist Arielle Smith reported on April 12. “It is unclear who put the poster up or who took it down. We will update the story as more details emerge.”

Annenberg Media representatives on Wednesday told The College Fix they have no updates on the situation. They did not provide the name of the professor who spotted the poster.

USC spokeswoman Emily Cavalcanti told The College Fix via email on Wednesday that “flyers posted at USC Annenberg require approval and we were not aware of this flyer.”

Meanwhile, the irony of a harmless attempt at dialogue taken down at an art exhibit created to ostensibly “spark dialogue” was not lost on some students.

“The faculty response to the outcry and criticism from conservative media outlets has been the continuous assertion that the artwork is meant to spark conversation,” wrote freshman political science major Shauli Bar-On in the Daily Trojan.

“But according to Annenberg Media, faculty decided to take down a poster put up next to the mural that read, ‘White Male Privilege is a Myth.’ If the true intention is to initiate conversation, then USC should have allowed this poster to stay up alongside the mural regardless of whether or not the faculty agree with its message. It appears as if the mural is meant to initiate a one-way message and recognize its affirmers rather than a spark a two-way dialogue with its dissidents,” Bar-On stated in his op-ed.

[Editor’s note: After this article was published, the Daily Trojan issued a correction to Bar-On’s op-ed stating that the ‘White Male Privilege is a Myth’ poster was removed, ‘but not by faculty.’ The newspaper does not report who it was removed by, however. The newspaper also deleted Bar-On’s entire paragraph to correct the error.]

Bar-On also pointed out that use of the term “whiteness” was counterproductive, that “by using the word ‘whiteness’ instead of ‘racism,’ ‘prejudice,’ ‘bigotry,’ ‘intolerance’ or countless other options, the mural fails to draw the empathy and attention of the very people it should be targeting.” 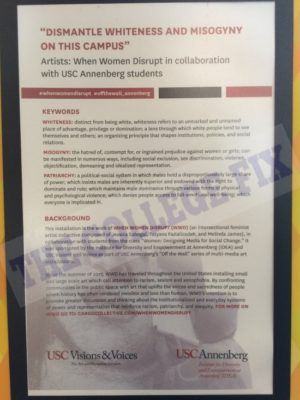 As for the overall controversy this exhibit has created on campus, Cavalcanti provided to The Fix a recent statement from the USC Annenberg School for Communication and Journalism office of the dean on the matter.

“The freedom to express views and ideas is at the foundation of the life of a research university. Accordingly, faculty and student groups have the right to host speakers and events, including those that feature controversial topics and issues,” it stated.

“ … The temporary installation is scheduled to be removed on April 30. Over the past several weeks, we have found discussions to be thoughtful and generative around the meaning of public art, the response it can stimulate, and the importance of semantics,” the statement added.

“We understand that there may be those who disagree with the statement offered by the artists. However, we firmly believe that civil discourse and the free exchange of ideas around sensitive topics are critical to the resolution of differences and to addressing issues facing our community and society as a whole.”

MORE: Pro-life pictures taken down – within hours – at USC