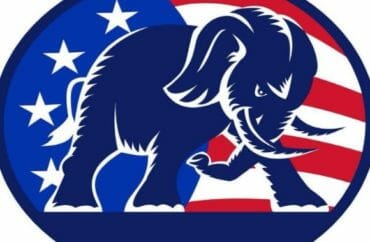 Stanford University College Republicans seeking to print their new logo on T-shirts have been told their design does not pass muster with the private institution’s trademark office because the image incorporates the American flag, according to an email from the office.

“Stanford does not approve the use of the American (or other flag on product also featuring our trademarks (including the Stanford name) [sic],” states a recent email to the GOP group’s financial officer from Kara Hegwood, a trademark licensing associate at Stanford University.

“We can approve red/white/blue themed product but cannot approve this design which features altered version of the flag in the background of the design, and within the initials for the organization name. I note you feature a different design on your website – we would be able to approve that design on product,” Hegwood added.

Hegwood, as well as Stanford media affairs officials, did not respond to emails and phone calls Tuesday from The College Fix seeking comment and clarification. It’s unclear which policy Hegwood is referring to, as a lengthy trademark guide on the university’s website does not appear to mention flags, according to a word search of the online resource.

The Stanford College Republicans financial officer, John Rice-Cameron, said Tuesday in an interview with The College Fix that he is not satisfied with the denial he received from the trademark office.

Earlier this week he

sent Hegwood an email asking why Stanford refuses to associate itself with the American flag, he said.

He said he does not want to use the old logo (seen at left), calling the new one a “kick-ass design.”

“The [new] logo is emblematic of our club,” he said. “It shows we are willing to boldly promote conservatism.” 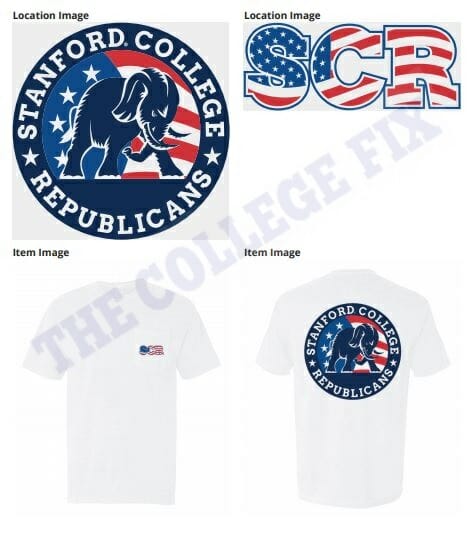 The Stanford College Republicans have begun using the image of the aggressive elephant in front of the stars and stripes on its Facebook page.

Rice-Cameron said his group needs to get approval for the Stanford College Republicans logo to be printed and used on T-shirts since that design includes the school’s namebrand. He said he is not willing to use the old logo, which Hegwood had suggested in her email.

“I’d like this design to be it,” he said of the new image.

Editor’s note: This article has been amended to change Rice-Cameron’s title to financial officer.