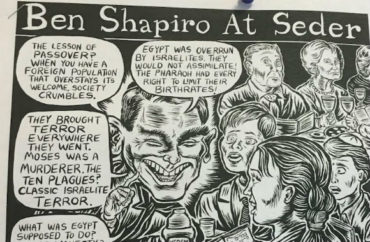 Apparently jealous of the attention paid to The New York Times for an anti-Semitic cartoon in its international edition, Stanford University’s chapter of Students for Justice in Palestine wanted in on the action.

It posted anti-Semitic cartoons on flyers advertising an event for the College Republicans chapter, the CRs said in a Facebook post Friday night.

One of them features “Ben Shapiro at Seder,” depicting the conservative Jewish pundit as a crude caricature. He explains how the ancient Israelites were terrorists in Egypt so Egypt had the right to “limit their birthrates.” The caricature concludes: “Judeo-Egyptian values built our world, and I’m not ashamed to admit it.”

The cartoons are advertising SJPs’ own May 10 event with the cartoonist who drew them, Eli Valley. His work challenges “colonial narratives [and] feverish nightmares from the Jewish diaspora,” and it has appeared in several left-wing publications. Valley is Jewish, and Jewish Voice for Peace is co-hosting the event.

The CRs called the Shapiro caricature “vile” and referred to Valley as an “Israel-hating propagandist.”  He and SJP “would make any neo-Nazi proud.”

The group said “Stanford leftists” also tore down its flyers for an upcoming event with crime novelist and conservative author Andrew Klavan, which happens “routinely” to the CRs event. Klava will speak on the subject “Yes, American is a Judeo-Christian nation.”

The CRs told Jewish News Syndicate reported that SJP is apparently the first group to tear down or vandalize its flyers, as opposed to individual students. The vandalism coincided with Palestine Awareness Week and Israel Week on campus.

Stanford’s Hillel chapter said Friday night that 30 Jewish student leaders came together to discuss the cartoons, which were also posted in dorms.

By the end of the conversation, it was clear that the [cartoon] fliers would all come down voluntarily, and that the acting Dean of Students, who was with us during this conversation, would reach out to the Resident Fellows and staff right away to alert them to the concerns raised by our community. Other steps may follow in coming days, but for now, we really appreciate how quickly Jewish students came together, and that Stanford University is taking our concerns so seriously.

Stanford law student Ari Hoffman wrote in a Stanford Daily op-ed that the cartoons were “seemingly drawn from Der Stürmer’s archives,” referring to the Nazi newspaper:

[Valley’s work] ranges from the morally repugnant to ethically disgusting. Under the fig leaf of criticizing Israel, it depicts Jews and Jewish rituals in the most grotesque of terms; yellow stars, concentration camp uniforms, blood libels and the reliable hooked noses. Like most hate, it’s remarkably lacking in insight. It is crude and disgusting, and its ceaseless recourse to Nazi imagery is matched only by its slavish devotion to the age-old tropes of Jewish caricature.

Hoffman compared Valley’s event with SJP to “donning black face and hoping to have a nuanced conversation about race or advertising an event on contemporary trends in Islam with an image of the Prophet Muhammad.”

He said SJP had apologized for sharing the cartoons “out of context” in a Sunday message to a Stanford Jewish community listserv. SJP’s Facebook page makes no mention of an apology, and the Daily news section does not mention it.