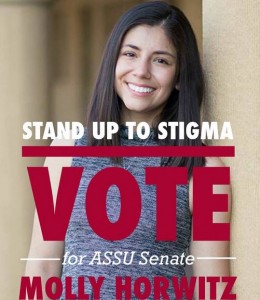 We ran a recent post about a powerful student coalition at Stanford University and its suspicious questioning of a Jewish candidate, in the context of how she’d vote on divestment from Israel, for its election endorsement.

Now the student government’s constitutional council has agreed to decide whether the group must be compelled to turn over “endorsement related documents” such as interview notes and emails. (No indication whether that could include an alleged contract that candidates must sign “promising not to affiliate with Jewish groups on campus.”)

The Stanford Review, an independent publication at the school, had “requested documents related to alleged misconduct at a [Students of Color Coalition] endorsement interview, in which Molly Horwitz ’16 claimed that she was asked an inappropriate question that targeted her Jewish faith,” The Stanford Daily reports.

The council’s review won’t settle the dispute over the questioning of Horwitz:

Article I, Section 7 [of the student government constitution], stipulates that, among other things, the records of any “Association entity” must be made available to the public, excluding certain things such as Legal Counseling records and the personal records of employees. However, in order for SOCC to fall under the jurisdiction of Article I, Section 7, they must be classified as an Association entity.

“This case is going to decide what is an Association entity and then what is a record,” said ASSU Constitutional Council Chairman Geo Saba. “It will have a lot of implications for all student groups, including SOCC. If an Association entity is any student group, any [Voluntary Student Organization], that means that all of those records, notes and documents will have to be made public.”

That’s an interesting question, whose answer may determine exactly how forthcoming student organizations are in their written communications and how much business they conduct in person or over the phone. (Even “vulgar” private texts can get you threatened with disciplinary proceedings in these serially-offended days.) What’s also interesting is a related dispute over whether one of the members of the council can hear the case impartially.

The Review asked one member to recuse herself because she previously served in leadership with MEChA, the left-wing Chicano activist group, which is a member of the Stanford coalition that pestered Horwitz about being Jewish.

Ireri Hernandez chose not to recuse herself, and all but one of the other members voted against recusal as well. They said the council’s ruling will affect all Stanford student groups funded by student fees, so it’s not purely about the coalition.

Yet on that very issue of divestment from Israel that ensnared Horwitz, the campus chapter of Students for Justice in Palestine wrote a fiery op-ed Sunday that contradicts the reasoning of the council.

The chair of the school’s Advisory Panel on Investment Responsibility and Licensing until recently served on the board of Stanford Hillel. For that reason alone, she shouldn’t have been allowed to advise the board of trustees on SJP’s divestment request last year, which was denied, the chapter wrote in the Daily:

The entire process of the APIRL and the Board of Trustees was thus fatally compromised. Basic standards of fairness in these kinds of administrative proceedings require that the person presiding over the process cannot be an institutional opponent or supporter of a contesting party.

We are alarmed at the university administration’s blatant misconduct in this process, and we expect that Stanford will correct the situation immediately. We believe that the only reasonable remedy is an entirely new review for SJP’s divestment request, from which [Susan] Weinstein should recuse herself. We eagerly await the administration’s response — we want to help Stanford end its complicity in the suffering of and violence against Palestinians as soon as possible.

It’s not a stretch to assume that former MEChA leader Hernandez would rather SOCC’s potentially damning communications about Horwitz not be made public.

She’d have a legitimate reason to vote against recognizing student groups as “Association entities” if she wanted – it could potentially chill the candor in private discussions before a group puts its imprimatur on a person or cause.

Yet Weinstein, the former board director for Stanford Hillel, whose feelings on divestment may be influenced by a host of practical considerations that have nothing to do with Hillel’s position, is constitutionally incapable of fulfilling her duties honorably, according to SJP.

While SJP isn’t part of the Students of Color Coalition, the Muslim Student Awareness Network, a coalition member, cosponsored one of SJP’s events this academic year.

Which one? “Case for Divestment: Justice for Political Prisoners.”