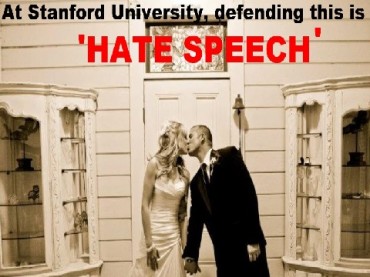 An upcoming conference organized by Stanford University’s Anscombe Society called “Communicating Values: Marriage, Family & the Media” has been dubbed “hate speech” by the college’s graduate-level student government, which refused to allow any of its student fee-funded budget to support the event.

The Anscombe Society is a conservative student group centered around traditional marriage and family values; it also encourages chastity, and tackles subjects such as sexual integrity and pornography.

According to the minutes of the student government meeting on March 5, a large group of angry students attended to protest the conference and its request for funding. They voiced a litany of complaints over why they believed the event should not be funded – as well as why it should not even take place on campus at all, comments met with strong support by most on the dais, who echoed similar sentiments (quotes taken verbatim from minutes and include stenographer errors):

“An event such as this would be a negative event, in schools that have negative events there is a statistically significant increase in suicide.”

” … makes homosexuals on campus feel less than equal to others.”

” … public schools cannot deny student group funding based on viewpoint, but enforcing viewpoint neutral policy that denies funding for hate speech is an entirely different ballgame. Even if Stanford was a public university, it would be perfectly legal to deny funding to events that make LGBT community feel unwelcome. It would be the same for Stanford to hold a conference on why heterosexuality is abhorrent, and to strip the right away from heterosexuals, and it’s equally unacceptable to host a conference to strip homosexuals of their rights.”

” … there is a lot of feeling espousing the view that marriage is between man and woman is, at the least discriminatory, at worst hate speech.”

“This event is small and exclusive, this doesnt make us feel in community welcome, we don’t feel included.”

There were also a few voices of reason, members of the student Anscombe Society and others, who supported the event, set for April 4 and 5 on campus.

“In the name is tolerance, we are silencing and taking away support from a view that we don’t agree with,” one student said. “These views are out there, we should listen to them. I totally disagree with these people, but we need to hear what they have to say.”

Ultimately, the Graduate Student Council refused a $600 funding request: “With a vote of 10 for, 2 against, and 2 abstaining, the funding to Anscombe Society has been retracted by the GSC,” the minutes stated. What’s more, the Stanford Daily reports that the undergraduate student government also denied the Stanford Anscombe Society a $5,000 funding request last week.

According to the Anscombe Society’s website, the event aims to “help university students and young adults to promote the values of marriage, family, and sexual integrity to the broader popular culture. Featuring speakers at the forefront of this effort, the conference will allow students to network with other individuals who are willing to engage in intellectual and civil discourse about the issues of marriage, family, and sexual integrity.”

Members of the Anscombe Society had met with the campus LGTBQ student leaders to try and forge a compromise, but none could be reached because the same-sex proponents wanted society members to disinvite speakers they deemed hatemongers.