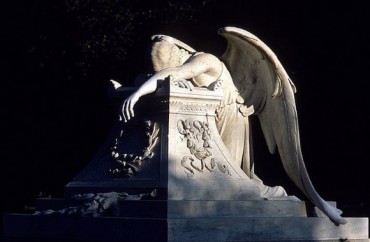 This is an absolute shame. Stanford University’s “Angel of Grief” statue – which depicts a weeping angel – had its arm chopped off by vandals.

Stanford News reports that someone broke off the front left forearm of the popular campus landmark, which was commissioned by Jane Stanford in memory of her brother, Henry Clay Lathrop.

“The arm, crafted of fine Italian Carrara marble, once drooped mournfully over a memorial. Now it is gone, stolen last week from its isolated site in Stanford’s wooded Arboretum,” reports the San Jose Mercury News.

“Why would someone hack off the arm of an angel — a symbol that is so pure an expression of love and commitment and faith?” Stanford archaeologist Laura Jones said to the Mercury News. “We take it very personally. The violence is disrespectful to Mrs. Stanford, to the campus and to the whole concept of grief and love and loss.”

Stanford’s Angel of Grief statue has arm chopped off by vandals. http://t.co/bn10TEc3de pic.twitter.com/9JooIu6Bzh

Police continue to investigate the crime, and an artist has been commissioned to replace the arm.