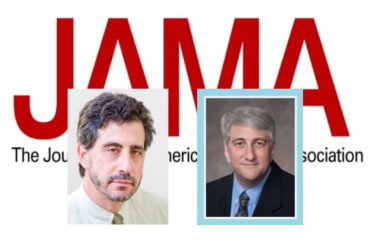 June 30 will mark the final day for Dr. Howard Bauchner as editor-in-chief of the Journal of the American Medical Association, as the professor of pediatrics and community health sciences at Boston University was forced to resign due to a controversy over structural racism.

He is the second such medical professor to lose his position, following in the footsteps of Dr. Edward Livingston, health sciences professor of surgery at UCLA School of Medicine, who was forced to resign as deputy editor earlier this year.

The two highly respected medical professors were pressured to give up their editorial positions at the Journal of the American Medical Association due to intense outcry over a podcast and tweet that questioned “structural racism” and was deemed “racist” by protesters.

Livingston, in a recent email to The College Fix, said the podcast never claimed structural racism did not exist, and in fact the whole point of the discussion was meant to reach skeptics and clarify the concept.

“The podcast was part of a 3-part audio series and written article about the high incidence and mortality of minority populations from COVID-19. The authors identified structural racism as one cause. There was no room in the article to cover that topic, so I asked them to define it in the podcast,” he said via email.

That 16-minute podcast published in late February was titled “Structural Racism for Doctors—What is it?”

As host of the podcast, Livingston asked guest Dr. Mitchell Katz, CEO of NYC Health + Hospitals, to explain what structural racism is and what needs to be done about it.

Livingston, in introducing his conversation with Katz, shared how he didn’t understand the concept of structural racism going into their discussion.

“The use of race for any sort of transactional activity was made patently illegal by the civil rights legislation passed in the 1960s,” said Livingston, who is a white Jewish male. “Given that racism is illegal, how can it be so embedded in society that it’s considered structural?”

“As a child of the 60s, I didn’t get it,” he continued in the podcast. “I asked Dr. Katz about this concept, what it means, and what needs to be done about it. In today’s JAMA clinical reviews podcast, we discuss structural racism for skeptics.”

Later in the podcast, Livingston suggests that “the term ‘racism’” is “harming us” and is counterproductive because it generally causes people to relate the concept of structural racism to individual attitudes, rather than oppressive policies that promote racial disparities.

“I feel like I’m being told I’m a racist in the modern era because of this whole thing about structural racism, but what you’re talking about, it isn’t so much racism as much as that there are populations—it’s more of a socioeconomic phenomenon—that have a hard time getting out of their place because of their environment. And it isn’t their race; it isn’t their color; it’s their socioeconomic status. It’s where they are,” Livingston said.

Near the end of the podcast, Livingston concluded that “structural racism is an unfortunate term to describe a very real problem.”

Livingston and JAMA came under fire soon after the medical journal promoted the podcast in a tweet that began with “No physician is racist, so how can there be structural racism in health care?”

JAMA dropped this 16 min podcast on structural racism that is insensitive at worst, violent at best. They’ll almost certainly delete it and release some pithy statement. I listened and took notes, bc it’s 4am, my call room cot is hard, + I got time today.https://t.co/A8Hxq7Aha2

One cardiology fellow on Twitter argued that the podcast was “insensitive at worst, violent at best.”

Thread on @JAMA_current: (JAMA has complete editorial independence from AMA so this would not come to me or my team for review) The podcast/tweet are/were wrong, absolutely appalling & at its very core is a demonstration of structural & institutional racism. I am furious. 1/ pic.twitter.com/o82H8dgR5v

“The podcast/tweet are/were wrong, absolutely appalling & at its very core is a demonstration of structural & institutional racism,” Dr. Aletha Maybank wrote. “I am furious.”

In response to the backlash, JAMA took down the podcast and deleted the tweet.

However, its removal seemed to only stoke more criticism.

1) Yes, physicians can absolutely be racist.

2) Yes, physicians can be complicit in upholding the practices and policies of systemic racism.

3) @JAMA_current, this tweet shouldn’t have bern deleted. It was a (yet, again) another learning opportunity for your journal. pic.twitter.com/G2PudNFCZz

The American Medical Association quickly published a statement condemning the podcast and the tweet that promoted it.

“The AMA’s House of Delegates passed policy stating that racism is structural, systemic, cultural, and interpersonal and we are deeply disturbed—and angered—by a recent JAMA podcast that questioned the existence of structural racism and the affiliated tweet that promoted the podcast,” said AMA CEO Dr. James Madara in a March 4 statement.

Livingston told The Fix that the podcast’s approach had “emanated from a recent vote in California where 57% of Californians voted against restoring affirmative action.”

Livingston also said that he had nothing to do with the tweet that promoted the podcast.

“The tweet was written by the JAMA media editors,” he said. “I have found it surprising that for all that has been written about this event no one has asked who wrote the tweet, why they said what they did and what, if anything, did the AMA do about that person.”

“I also wonder why it is OK for high AMA officials to continue to refer to the podcast as one ‘that denied the existence of structural racism in medicine’ when there is absolutely no truth to that statement,” Livingston told The Fix.

While Madara in his statement noted that the Journal of the American Medical Association has “editorial independence from AMA,” he stressed that the tweet and podcast were “inconsistent with the policies and views of AMA.”

“I’m concerned about and acknowledge the harms they have caused,” Madara said. “Structural racism in health care and our society exists and it is incumbent on all of us to fix it.”

Now in place of the controversial podcast is an apology from Bauchner, the outgoing editor-in-chief. In his apology, Bauchner notes that the JAMA podcast was based on a discussion between Livingston and Katz and that “comments made in the podcast were inaccurate, offensive, hurtful, and inconsistent with the standards of JAMA.”

Included among these changes was asking Livingston to resign—which he did.

Even so, several in the medical community insisted that the journal do more to “dismantle” institutional racism.

Join me in calling for the urgent dismantlement of institutional racism at the Journal of the American Medical Association, @JAMA_current.

Their racism has gone unchecked for too long.

A petition, created by a group called “The Institute for Antiracism in Medicine,” specifically demanded that the Journal of the American Medical Association review Bauchner’s leadership, hire a “deputy editor with a dedicated focus on antiracism and health equity,” establish “balanced, fair, and equitable” editorial processes, as well as hold a “series of town hall conversations with Black, Indigenous and People of Color patients, health care staff and allies to ensure restorative justice.”

This week @JAMANetworkOpen questioned the impact of structural racism in medicine.

We ask that you demand this TOP medical journal–impacting the lives of BIPOC patients and providers worldwide–take a clear antiracist stance.

A week later, AMA reported that the Journal of the American Medical Association had hosted an employee town hall “to hear firsthand the concerns of JAMA employees,” was conducting “an end-to-end review of all editorial processes,” and would hire a new associate editor who has “specific expertise in the topics of racism and structural racism in health care.”

It also published its own three-year plan for “embedding racial justice and advancing health equity” and placed Bauchner on administrative leave while it launched an outside investigation into how the podcast and associated tweet were “developed, reviewed, and ultimately posted.”

When asked by The College Fix about the current status of the investigation as well as other questions, the Journal of the American Medical Association simply responded by sharing AMA’s original statement on the podcast and tweet as well as a June 3 editorial in which the editors of JAMA describe their plans to implement and promote diversity, equity and inclusion both in the journal and broader medical community.

On May 16, the Institute for Antiracism in Medicine’s three black female co-founders—Dr. Brittani James, Dr. Brandi Jackson, and Dr. Jessica Richardson—sent an open letter to AMA calling on the organization to commit to “concrete changes” — “including the replacement of Dr. Bauchner as Editor-in-Chief.”

“We believe the evidence included here shows a history of problematic behavior which can only be responsibly rectified by his removal,” they wrote.

Despite his apology and efforts to satisfy critics, AMA announced that Bauchner would step down as editor-in-chief of the Journal of the American Medical Association, effective June 30.

In that June 1 announcement, Bauchner states that he shares and has “always supported the AMA’s commitment to dismantling structural racism in the institutions of American medicine.”

“I remain profoundly disappointed in myself for the lapses that led to the publishing of the tweet and podcast. Although I did not write or even see the tweet, or create the podcast, as editor-in-chief, I am ultimately responsible for them,” he said.

Writer Andrew Sullivan, in a recent piece, suggested that Bauchner’s and Livingston’s departures are the consequences of a larger, yet purposely ambiguous, agenda.

“As you might imagine, any kind of questioning of this orthodoxy required the defenestration of the deputy editor and the resignation of the editor-in-chief. The episode was withdrawn from public viewing, and the top editor replaced it with a Maoist apology/confession before he accepted his own fate,” Sullivan wrote.