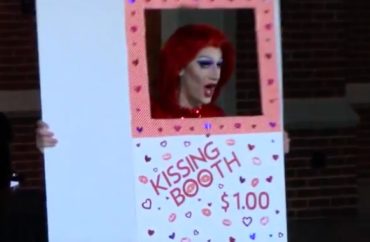 A student at a Catholic university was called into a meeting with the school’s Title IX coordinator this week after speaking out against the university’s cross-dressing drag shows, claiming that they represent “an assault on the dignity of the human person and the divine gift of ordered sexuality.”

In his column in The Carroll News, Declan Leary said the Jesuit-run John Carroll University was providing “deviant entertainment” for “misguided young people” by sponsoring the annual event where men dress as women.

“It is a terrifying testament to the decay of our faith and our university that, throughout the approval process for this event and the six years for which it has now continued, not a single person in a position of authority stood up (or at least stood with sufficient strength) to suggest that perhaps such a flagrant celebration of sexual perversity might just be wrong,” Leary wrote.

Following an article at Cleveland.com detailing the “uproar” that resulted from Leary’s column, The College Fix reached out to Leary via Facebook message. Leary informed The Fix during an interview that, after the column’s publication, the school’s Title IX coordinator, Eric Butler, had requested a meeting with both him and Olivia Shackleton, the editor-in-chief of The Carroll News.

Leary said the Title IX meeting was requested in response to the article. On Wednesday evening he told The Fix that he had met with the coordinator and “nothing really came of it.”

“I just got the impression that he was required to meet with me because of all the complaints he received about the column,” Leary said. It is not clear if the meeting itself was mandatory. Butler did not respond to requests for comment.

Leary and Shackleton are also supposed to meet with two more senior officials, but it’s not clear whether those meetings are related to Leary’s column denouncing the drag show. “It is in our staff manual that these meetings should happen annually,” Shackleton said.

McCarthy and Peck also did not respond to requests for comment.

On Wednesday evening, Leary also revealed to The Fix that he has a meeting with the school’s president, Michael Johnson, at the end of next week as well, though he did not elaborate on why that meeting had been scheduled. Johnson had not responded to The Fix’s requests for comment on the controversy prior to Wednesday evening.

Leary said many of the responses to his column have been “very angry.”

“The progressive students who have the support of the institutional power here have been very aggressively calling for me to be silenced and attempting to discredit me and my writing,” he told The Fix. “Their message is essentially that my column is hate speech because it attacks their beliefs, and that the university should not allow someone like me to speak out.”

Leary provided The Fix with nearly a dozen letters The Carroll News has received since his column ran, many of which accused Leary of promoting “hate” or “hate speech.”

He denied the charges. “I wholeheartedly support the welcoming and care of individuals on our campus who do not espouse or live by Catholic teachings on sexuality, morality and human nature, but I believe strongly that a Catholic university should not compromise Catholic teachings in order to accommodate these people’s disagreement or even their discomfort,” Leary said.

Student Lillian Perkins told Cleveland.com that her “LGBTQ+ peers are not an issue to be addressed in a newspaper … The fact [Leary] even thinks it’s up for debate is dehumanizing.”

In an interview with The Fix, Perkins said the newspaper “should not publish hate speech because it is a violation of some of the basic ethical guidelines of journalism.” She defined “hate speech” as “speech that attacks a group of people based on particular identity markers, such as race, gender, sexuality, etc.”

“I am not calling for the government to shut down the publication. I am not asking for federal agents to arrest the editors of the paper. I am asking that the university publicly come out against the opinions stated in Leary’s article, as well as a retraction of Leary’s hateful articles with an apology on the part of the The Carroll News,” Perkins said.

In his article Leary wrote:

The Jesuits and their progressive allies … seek to redefine our nature in order to conform to the culture of sexual perversion, instrumentalization and commercialization which has so ravaged the human soul and body. We cannot be immoral, they seem to be saying, if we redefine our morals to justify our sins. This cannot be the solution. …

In his interview with The Fix, Leary stated: “The best way to include these people is to show them the full and true teaching of Christ and His Church. We do them no service and show them no love in embracing a culture of sin which has been mistaken for identity.”

Though Leary has gotten negative responses to his article, he has received some support.

“I have also gotten a great deal of private support from the many conservative students and alumni who feel like they cannot speak out as publicly as their leftist peers. Many people feel that they finally have a voice at John Carroll,” Leary said.

The university has been hosting drag shows for a number of years, and at least one student has protested it before.

In 2013, student Devan Jacobson protested the show by praying the Chaplet of Divine Mercy for the duration of it. Jacobson “questioned the priests’ attendance at the show and suggested that they may have committed a sinful act by choosing to make an appearance at the event,” according The Carroll News.

Jayme Stayer, a Jesuit priest and a professor at the university, told The News at the time: “I’m scandalized by the homophobia implicit in [Jacobson’s] question. The identity of homosexuality, as the Catholic Catechism makes abundantly clear, is not a sin. To assume LGBTQ persons or their allies are sinful because of their identity is both naïve and uncharitable.”

In his column earlier this month, Leary said that the Jesuits on the campus are “not who they say they are.”

“It is time for John Carroll University either to radically alter its actions and its character, or to admit the obvious and unfortunate truth that it is no longer Christian,” Leary wrote.

The university’s media relations department did not respond to The Fix’s requests for comment on the issue.

MORE: Public university hosts workshop to teach students how to be drag queens