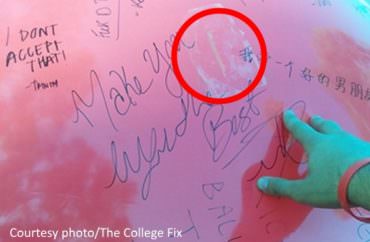 A student at University of California San Diego has been referred to its Office of Student Conduct after writing communist propaganda on the Young Americans for Liberty’s free speech ball — then stealthily stabbing it with a pocket knife, causing it to deflate.

The suspect was led away in handcuffs after students tracked down the bandit. 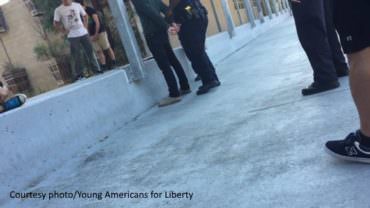 The incident happened while the pro-liberty group on Friday passed around a petition calling for the University of California to loosen its restrictions on free speech.

To help publicize their petition, they also blew up a mega-sized beach ball to allow students to write whatever they wanted on it as a way to support and promote free speech.

“I remember he took our free speech petition, hands visibly trembling, and wrote his name as Karl Marx,” said Brian Pryor, a field representative with the Leadership Institute, in an interview with The College Fix. Pryor is not a student, and was on campus to help Young Americans for Liberty with their effort.

“Then he went up to our free speech ball and kept shifting to an area where we couldn’t see him writing on it,” Pryor said. “We saw later that he wrote the Latin phrase ‘sic semper tyrannus,’ meaning ‘thus always to tyrants’—the phrase uttered by the Roman senate before killing Julius Caesar and by John Wilkes Booth before assassinating President Lincoln.”

After the student left, club officers noticed that the ball was quickly collapsing and had been stabbed near the area where “Karl Marx” had worked on it, and at that point they called campus police to file a report, Pryor said.

After filing the report, the group noticed that the student left an email address next to his pseudonym, which was the same name as the campus communist bookstore, the Groundwork Books Collective, he said, adding they left the event and found the student at the bookstore surrounded by several of his comrades and a much older man. 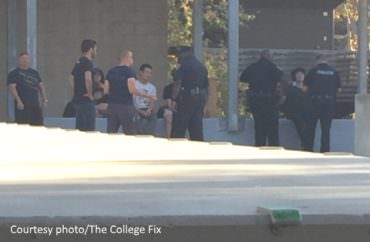 According to Pryor, the student panicked and the older man shoved Pryor out of the bookstore. YAL club officers quickly went outside and surrounded the exits. While calling the police, the student burst out of a back exit and was caught by an off-duty campus police officer, according to observers.

After police seized his knife, the student explained that the free speech ball was promoting rape culture and that was why he decided to stab it, Pryor said he overheard.

The suspect was led away in handcuffs.

Laura Margoni, a spokeswoman for UC San Diego, confirmed the incident in an email Sunday to The College Fix.

“A Free Speech ball was being passed around at a Young Americans for Liberty group event on campus. The ball was passed to one student who took out a pocket knife and punctured the ball,” she said. “Police were summoned and questioned the student. The owner of the ball decided not to press charges for vandalism and the student was never arrested. The student has been referred to the Office of Student Conduct.”

“I don’t agree with communism or socialism, but as a centrist I believe that we should hear both sides of any argument,” he told The College Fix. “But to stab a beach ball that people are writing on? I am giving you a platform to write whatever you want. I am literally giving you permission to write ‘Capitalism sucks, communism rules’ — but the student decided to ruin it for everyone.”

After the incident, the club was able to patch up the ball and continue on with the event.

Nathan Fatal, the West Coast regional director at YAL on hand that day to help the students, said the incident is telling in two ways.

“One—that the fight for free speech is gaining momentum,” he said, “and two—that this is a reaction of those who do not support free speech or respect rights of other people. Their attempts at silencing those they disagree with are getting more desperate and they’re now resorting to violence.”

Editor’s note: The story was updated to add that the suspect had been led away in handcuffs.