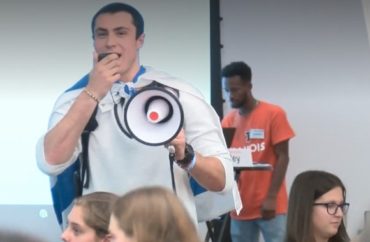 ‘Transparent goal was to shield anti-Israel groups from any accountability’

If you’re going to define anti-Semitism as a student government, you might want to consult Jewish groups. The optics will look bad if you don’t.

Hundreds of people walked out of a University of Illinois student government meeting in protest on Wednesday night after the body approved a resolution denying that anti-Zionism – opposition to Israel’s existence – constitutes anti-Semitism, WCIA reports.

They walked out to protest this attempt “to silence the Jewish right to define hate and discrimination against them. … If the [Illinois Student Government] wants to pass a bill about the Jewish community without Jewish support, it just shows that they don’t know their constituents.”

The four-page resolution is titled “Condemning Ignorance of Racism and Equating Anti-Zionism with Anti-Semitism.”

It appears to have been prompted by an email to the community earlier this month by Chancellor Robert Jones, who expressed concern about a residence-hall presentation titled “Palestine & Great Return March: Palestinian Resistance to 70 Years of Israeli Terror,” according to The News-Gazette.

The resolution accuses the university administration of chronically ignoring “clear, active, and threatening anti-Semitic behavior,” saying it has yet “to take sufficient or appropriate actions given the severity of these events,” and “creat[ing] space for holocaust deniers, Nazis, and other individuals — by allowing an individual to spread hateful anti-Semitic ideologies on campus.”

Its subject matter abruptly shifts on the second page, blaming the administration for not consulting “the student body” before responding to “hateful or predatory acts on campus.” The Oct. 9 email from Jones “improperly characterized” the Palestine presentation to residence hall advisors, which “had no Anti-Semitic content in it.”

The resolution goes on to contrast Oxford English Dictionary definitions for Zionism and anti-Semitism, and accuse the administration of “a history of equating Anti-Zionism with Anti-Semitism”:

[T]his false equivalence has been used as a scare tactic against students and workers in the Palestine movement, and it is rooted in a false understanding of what the movement advocates for …

[T]he rights of the student targeted in the email are being violated by the very administration responsible to protect them, including possible legal defamation issues …

The student government demands that the administration retract Jones’ comments “that conflated” anti-Zionism and anti-Semitism and issue an apology for “slandering many students’ image and their cause.” It also supports demands by the campus chapter of Students for Justice in Palestine except for the conditional resignation of Chancellor Jones.

One of those demands is that “at least one” SJP member serve on a committee to review campus communications before they go out. Jewish Voice for Peace, which is frequently out of step with other Jewish groups, signed the demand letter.

An unidentified student senator told WCIA that the student government consulted with “Jewish students” on the resolution – possibly referring to Jewish Voice for Peace – and that its purpose was to “protect student rights and their freedom of speech.” The resolution passed with 29 yays, four nays and four abstentions.

But the resolution had no input from “major” Jewish groups, according to WCIA. Pro-Israel group StandWithUs says the resolution was passed without “consulting the Jewish community or securing their consent”:

Jewish students initially attempted to educate ISG members about why the resolution was wrong, but realized most were not interested in hearing or representing them. After it became clear that ISG would not retract and apologize for bringing the resolution forward, Jewish student leaders mobilized hundreds of their peers to protest and walk out of the vote.

“The transparent goal of this resolution was not to oppose antisemitism, but to shield anti-Israel groups from any accountability when they cross the line into hate speech against Jews,” said Liora Bachrach, Associate Director of Campus Affairs at StandWithUs. “The fact that this was even introduced is a mark of shame on ISG, which has made a mockery of its own stated values. We are proud of Jewish students who came out in large numbers, and showed that ISG has no legitimacy or credibility to speak about this issue.”

A spokesperson for StandWithUs told The College Fix in an email that it was “no surprise” that “SJP’s resolution” passed the student government. “The pro-Israel students walked out in the middle of the ISG meeting and held a vigil outside.”

Asked why it refers to the resolution as “SJP’s” when the organization is not listed as an author or sponsor – only individual student government members are listed – the spokesperson cited the “let it be resolved” line that supports SJP’s demands.

The resolution before you is absurd. Never again will anyone allow the Jews to feel unsafe on this campus, whether we be affected by swastika graffiti, neo-nazi vitriol on the quad, or university-sponsored presentations which uniquely seek to delegitimize the establishment of a Jewish state. …

This resolution was written without Jewish input. Not a single Jewish cultural house was consulted, and yet it purports to speak for the campus community. We watched as it was beelined through the senate and the committee during some of our holiest of days, with the explicit intent to avoid our input. …

Since we were never invited to take part in this conversation, I invite all of the Jewish students and their allies to leave this chamber with me.

UPDATE: The exact vote tally for the resolution was in dispute when this post was originally published. Multiple media outlets are now reporting the same tally, so the other reported tally has been removed.