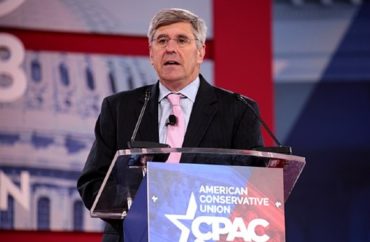 “Once student loans move to ‘free college’ for everyone, university tuitions, which are already soaring at two to three times the inflation rate, would race further ahead of all other consumer prices,” Moore predicted.

The Heritage Foundation economist (pictured) wrote that Biden disregards the “fundamental problem” with soaring college costs and student debt, which is that “universities have become fat, flabby, and inefficient money burners with no accountability [and no] oversight.”

“No getting rid of bad teachers and professors,” Moore stated in his opinion piece. “No looking under the hood to see where extraneous costs could be axed.”

Moreover, the cancelation plan is unjust because it “makes suckers out of the millions who have felt honor-bound to pay off their debts…Who would ever pay off a student loan ever again after this blanket forgiveness program?”

Additionally, higher-income families would benefit most from the cancelation because they disproportionately hold the debt. “This is a giveaway to the financially successful students and families paid for by middle-class workers, millions of whom didn’t go to elite universities,” Moore wrote.

“Why should taxpayers pick up the tab?” he asked. He suggested that “universities with massive endowments, in many cases in the tends of billions of dollars,” should be required to pay off student debts incurred by students for “virtually worthless, useless” degrees.

“It’s just a question of who pays the piper. And it shouldn’t be YOU,” Moore wrote.

MORE: Student loans should be repaid based on income, say Georgetown law professors