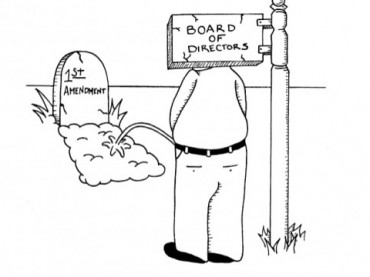 A fight over who controls the ‘tone’ of The North Wind

A fight between a student newspaper and university administration over corruption allegations has morphed into a First Amendment lawsuit by the former faculty adviser and managing editor.

Cheryl Reed, who remains an English professor, and Michael Williams accused members of The North Wind’s board of directors – including a top Northern Michigan University official – of illegally removing them from their positions in retaliation for investigative reporting.

The board’s failure two weeks ago to reappoint Reed for the upcoming academic year represents “a complete cleaning out,” she told The College Fix in a phone interview before the suit was filed.

The administration is advertising “an open position for a new community journalist, which the president is having his spokesperson vet,” and wants to appoint a new editor who “could come in and fire everyone,” Reed said.

The North Wind “could completely turn into a [public relations] rag.”

‘A campaign of intimidation’

Steven Neiheisel, vice president for enrollment and student services, and four students appointed to the board violated “established Board procedures” in rejecting Reed and Williams, according to the federal lawsuit filed Thursday.

Their actions were “the product of a campaign of intimidation motivated to punish and chill student journalists’ investigative news reporting about the University, including reporting critical of NMU,” the suit said. Reed told The Fix her snub stemmed from “the board’s displeasure of the stories that have been appearing in The North Wind and my defense of the students and their right to print those stories.”

The Fix previously reported on tensions between newspaper and administration over Freedom of Information Act requests for the school’s contracts with certain companies, as well as for administration emails that could show “a concerted plan to intimidate” student journalists over the FOIAs.

At its April 3 meeting, the board rejected Reed’s reappointment 5-3 and the editor-in-chief application of Williams – the only candidate – by a 5-4 margin.

The vote “may have violated” The North Wind’s bylaws, the paper reported the next day.

The section editors were at the meeting but weren’t asked whether Reed should be reappointed and weren’t allowed to speak, the article said.

“The North Wind bylaws state: ‘The Journalistic Advisor shall be selected annually by the English faculty and department head from faculty members, with their choice subject to the approval of the North Wind Board of Directors and editorial staff,’” the article said.

Further, Neiheisel allegedly attempted to influence the decision of student board members, according to documents obtained by The Fix.

Neiheisel met privately with the student members, apparently to dissuade them from reapproving Reed and counseling them against approving FOIA expenses the paper had submitted, the paper reported April 9.

Neiheisel denied any discussion over Reed’s position, the paper said, characterizing his view of those meetings as “innocuous.”

“There were, as I think everyone is aware, some new challenges during the winter semester and I thought it good to start the semester before the board meeting with everyone familiar with the bylaws and their roles,” Neiheisel told the paper.

Mary Malaske, student representative and secretary of the board, told the paper that Neiheisel did in fact discuss Reed during a meeting with her.

He emphasized to Malaske that the bylaws require the board to regulate the “tone” of the paper, “urged her to vote down The North Wind’s FOIA request for administrators’ emails and spoke critically of” Reed, the article said.

Neiheisel’s emails were subject to that FOIA request, suggesting a conflict of interest with his involvement in the situation.

“That’s an open meetings violation and it’s also a violation of the First Amendment,” Reed told The Fix, referring to Neiheisel’s meetings with student board members. “You can’t, as an agent of the university, the vice president, try to thwart the newspaper’s investigations.”

However, four of the five student members – Aubrey Kall, Erik Laksonen, Troy Morris and Pearl Gaidelis, all of whom are named in the lawsuit – issued a statement denying any malfeasance.

“Each of us made up our own minds,” they said. “We are independent thinkers. We take issue with how our fellow student board member [Malaske] and the North Wind have characterized us as easily influenced, poorly informed and impressionable.”

‘A pattern of abuse’

The vote to remove Reed and not hire Williams was not entirely shocking to her, Reed told The Fix: “It’s been a pattern of abuse. It’s not something that occurred overnight.”

The paper has filed multiple FOIA requests going back to the fall semester. It reported on secret clauses within the university’s contract with Starbucks, and got a trove of 9,000 documents in response to its request for a Lenovo contract – most of it unrelated to Lenovo.

In response to perceived intimidation over the FOIAs, outgoing Editor in Chief Emma Finkbeiner filed another request for emails from university officials to “make sure there wasn’t a greater plan from the top down to find ways to make us stop being so aggressive in our investigative reporting,” she previously told The Fix.

Those documents were heavily redacted, prompting the paper to push for an outside party to review them – a request granted by President Fritz Erickson, with conditions.

Shortly after this, Reed said the newspaper received an anonymous phone call from someone reportedly close to the board of trustees telling the newspaper to investigate travel expenditures for the trustees.

After it received travel receipts under another FOIA request, the paper reported March 19 on a trustee’s use of private planes and expensive hotel suites when trustees come to town for board meetings.

Solidarity from student and professional journalists

The North Wind’s troubles have drawn solidarity from other student papers.

Miami University’s Miami Student wrote in an editorial that “it’s here to report the facts, and there should never be fear that a university will retaliate against a college newspaper for doing so.

“This might be a landmark case for college newspapers and it is important that student newspapers across the country join hands in solidarity with The North Wind in an effort to protect editorial freedom.”

The Society of Professional Journalists called for Reed’s reinstatement on the grounds that her dismissal “violated First Amendment principles,” and SPJ National President Dana Neuts said student media boards “must avoid any hint of censorship or pre-publication interference.”

Executive Director Diana Mitsu Klos praised The North Wind’s quality: “In the first three months of 2015, The North Wind has won four ACP awards, more than the publication has won in any full 12-month period since 2006.”

The College Media Association said it was “deeply concerned” over Reed’s dismissal, calling the move a violation of the association’s code of ethics regarding “arbitrary removal of staff members or faculty” and “external influence designed to regulate” newspaper content.

“I see this as an attempt by the administration to take over The North Wind and I can’t in good conscious sit by and let that happen,” Reed told The Fix.